Mark and I went out this evening to see Miss Saigon so were getting home fairly late. We picked up a pot of lamb mulligatawny soup and a half-baked baguette to have when we got in. Just what we needed!

When we arrived we were welcomed with a sharing plate of olives, some beautifully light olive oil, homemade harissa, and home-cooked organic bread. We had a great conversation with the owner and he told us all about the fundamentals of Moroccan cuisine and helped us choose a range of starters and mains that really represent Moroccan food. For me, the best tagine was the lamb with tfaya (caramelised onions and raisins). The meat was melt-in-your-mouth tender and the tfaya brought that depth and sweetness that I just love in a tagine. For dessert, again we ordered a range of things, but the orange salad was the one that really stood out for me. It was simply sliced fresh oranges sprinkled with some sugar and cinnamon and it was just gorgeous! 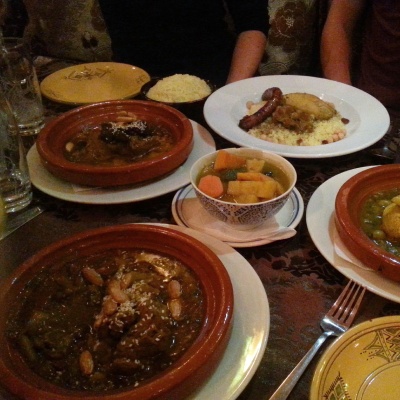 My friend Ashanti was over this evening to watch the bake-off, and the two of us both love all things Japanese. Ashanti lived in Sapporo in Hokkaido, Northern Japan, for two years and we both wish we could just up sticks to Japan sometimes. Ash is also a vegetarian so we experimented this evening with a veggy Japanese curry. We basically went to the supermarket and wandered around the veg section to see what we could use in our curry. We picked up some sweet potatoes, a cute little yellow munchkin pumpkin (we’re getting to that time of year again…and yes the primary reason we bought it was its cuteness) and some tofu. I reckon aubergine could work well in a Japanese curry but tofu was enough of an unknown quantity for me today having never cooked with it before. We chopped everything up and started the vegetables in a saucepan before adding some water just to cover the veg and a Japanese curry block. I get my curry blocks from the Japan centre, but some supermarkets have started selling the Golden Curry ones. We drained the tofu and briefly fried that up in a pan before transferring to the curry pot. Meanwhile the rice was cooking away in the rice cooker. It turned out to be a really tasty curry! I’m not normally a huge fan of tofu but I couldn’t get enough of it in this curry, and the texture of the cute little pumpkin was not what we were expecting, it was more potato-like, but it worked really well and gave a great contrast to the tofu and sweet potato. I now have a great veggy curry to add to my list!

I was recently at the Japan Centre and I picked up these tofu pockets for making Inari sushi. Mark and I love these little sweet pouches full of sushi rice and I hadn’t realised until now that you could buy the tofu ready-made! I just cooked up some rice and made some sushi vinegar to season it. There’s a great recipe here for sushi rice http://www.justonecookbook.com/how_to/how-to-make-sushi-rice/. Once the rice was seasoned and cooled, I popped a ball of rice into each pocket, adding as much as I could, but making sure I could still close them and that they wouldn’t tear. These are great on their own but I thought I’d serve them with a Japanese autumn vegetable soup now that the autumn is starting to creep in. I heated some dashi stock, added some soy sauce and mirin, rehydrated some shiitake mushrooms and lotus root, and added them to the broth along with some Japanese sweet potato, kabocha pumpkin and enokitake mushrooms. Just looking at this soup transported me right back to Kyoto! The Inari sushi tasted just as I expected them to and the broth was lovely and warming, and the shiitake mushrooms gave it a great earthy autumnal flavour. 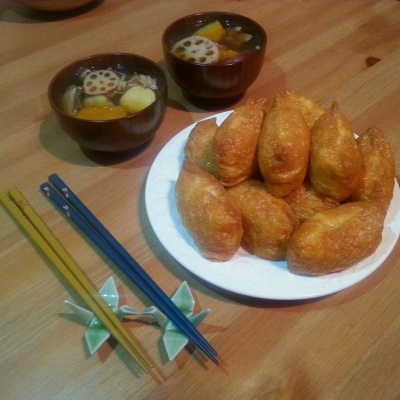 On my recent trip to the Japan Centre I also picked up a bottle of yuzu juice. I LOVE yuzu – it’s a Japanese fruit that has a great zingy citrus flavour somewhere between lemon, mandarin, and grapefruit – and I couldn’t wait to try it out in a recipe. I found this recipe and decided to change it up a little so that the avocado was more of a salad than just a dressing, and that the tuna was seared rather than sashimi. The yuzu dressing to go over the top was what I was really excited about, and I was a bit worred that the sesame would overpower or wouldn’t quite work, but this dressing was heavenly and perfectly balanced. The tuna was great but I could really eat that avocado yuzu salad all day long.

Today we were in town meeting with a travel agent to talk about our honeymoon options so we picked up a quick lunch from Whole Foods while we were there. These are not the cheapest of salads but you get a huge choice of foods and we were pretty hungry so we went all out. My favourite was the Italian pasta salad, but I also loved the beans and lentils that I topped with a sprinkle of feta cheese. I made sure there were plenty of greens in there to balance it out though – I promise!!

Mark’s sister Claire was on holiday in Italy recently and kindly brought us back some lovely foodie presents: a bottle of lemon olive oil, and this packet of the dried ingredients for Pasta alla Putanesca. Tonight we decided to give it a try so we rehydrated the ingredients, put the pasta on to cook, added some chopped tomatoes and that was it – and it was delicious! 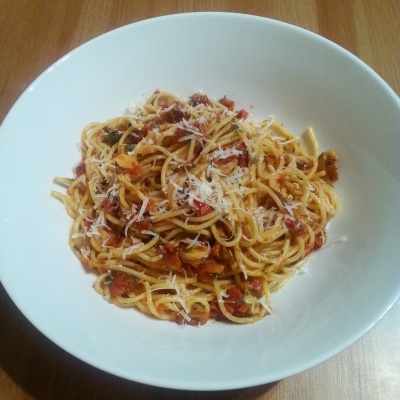