This was another MUJI sachet that I picked up in Japan for when Mark and I were feeling lazy…and today was that day! I wasn’t totally blown away by this and didn’t love it as much as other MUJI packets we’ve tried like the squid ink spaghetti sauce, but it was so easy to make and so I couldn’t complain too much.

I chose this recipe as it used up a few ingredients and just ticked all the right boxes for the kind of food I was feeling today. It’s a bit of a pain trying to find the right pomegranate juice but we drifted from the recipe a bit and it was fine! Once you’ve got the ingredients, the actual food prep is simple and the end result is really tasty!

I was out for a work lunch at Pham Sushi today to celebrate my anniversary of starting at the company as well as a couple of birthdays. I can’t give this restaurant high enough praise and it’s probably my favourite Japanese restaurant in London. They have a really broad menu including sushi as well as a number of hot Japanese dishes like noodles and donburi. I love their unagi nigiri and their crunchy tuna sushi rolls. As today was a special occasion, and because I love this restaurant’s unagi, I went for the Unazu or unagi don. Japanese grilled eel comes in a marinade or sauce that is quite rich and can be cloying so I felt I was taking a bit of a risk but it was just what I fancied. Pham Sushi did not disappoint and in fact pleasantly surprised me because the portion size was so spot on that I was just about full but the richness of the sauce didn’t become too much.

Unagi! Delicious! I love eel and had to choose this dish at some point during the year. I prefer this to having eel in a soup or mixed dish as you get to savour the flavour of the grilled fillets combined with the sweet glaze, which tastes similar to teriyaki. The eel was grilled well considering this was a takeaway, and relatively cheap. These dishes can be quite expensive in restaurants. Looking forward to when I can have this again. 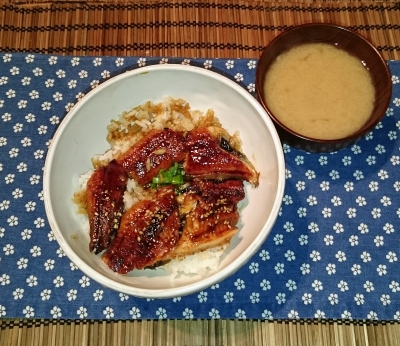 I mentioned this dish in an earlier post and so thought I’d have it as my dish of today. The base of the eggs benedict isn’t an English muffin, but instead they serve the beautifully poached eggs on top of a bubble and squeak patty with a light panko crumb and your choice of bacon, halloumi, smoked salmon, or pork belly, and of course all topped with a smooth hollandaise! My favourite is the halloumi having tried all but the pork belly on different occasions. Can’t recommend this dish enough! I also ordered a side of chorizo because…well why not?

I was going to be out in the evening for dinner at a friend’s house so decided to have an exciting lunch rather than complicate dinner arrangements. When someone is cooking for a lot of people I don’t want to be a hindrance. I ended up heading back to Food Filosophy to try another one of their salad combinations. This time the meatballs caught my eye, so I combined them with a mushroom rice and two different lentil salads. The beef meatballs were excellent and I was very happy with my choice of accompaniments. I was stuffed by the end of it (the meatballs were huge!) so had to leave the slice of carrot cake I had also bought till later in the afternoon.

For Mark’s sister’s Christmas gift, we said we would take her to this vegan restaurant that Mark had found in West Brompton. Finally we managed to set a date to go! Everything on the menu is vegan, but you can also get gluten free and raw options. We started with a trio of dips with pitta breads and they were SO good. I especially loved the tomato/pepper (I think) dip! I have to mention the vegan seitan stroganoff that Claire ordered here because it was heavenly! It’s made with cashew cream and I will definitely be coming back here to have that at some point!

I opted for the vegan burger as my main course. I was a bit disappointed by the bun it came in as it was quite dry and let the dish down but the tofu and veggie mince patty was tasty and so was the relish.

The vegan roast came as a potato and parsnip mash, roast vegetables, and seitan strips, all served with a tasty onion gravy. I was really impressed with the seitan strips, something that I’ve never had before. The texture was quite soft but could have passed for meat when on a forkful with some mash and vegetables. The star of the dish was the gravy, which I drowned everything else with, and it gave a lot of flavour to the relatively simply mash and vegetables.