This salad was easy – super easy! We didn’t have red wine vinegar so we used white wine vinegar instead which worked just fine. Perhaps red wine vinegar gives more depth of flavour, and I was a bit worried that using white wine vinegar would be too tart and acidic but I don’t think it was at all. I devoured my portion because I just couldn’t get enough of it! I made a big batch so that Mark and I could take the salad for lunch the next day too and I almost think that it’s better after being left overnight. I’ll be making this a lot for my lunches this year. 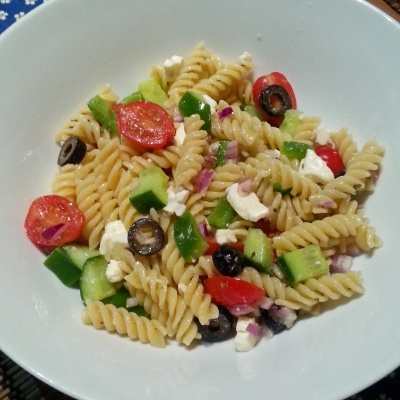 I wanted to cook this tonight because we had my Dad staying and I clocked this recipe when I was looking through some recipe books recently. The only problem was it was a bit of a mission to find ingredients. I spent a lot of time searching for the shichimi spice mix because I wasn’t going to be going past the Japan Centre and I eventually found in in M&S in Wimbledon (but not in Moorgate so you have to know your stockists!). After managing to get all of the ingredients, the dish had some disappointments and not at all because of the recipe. The duck was slightly under because we’ve never really cooked duck before, but it was still tasty, but the main dissapointment was the noodles from M&S. I just didn’t love the texture and they were really bland. Maybe next time I would cook them in some seasoned water but I don’t think I’ll buy them again. I’m really struggling to find good places to buy ramen noodles. Maybe I’ll see if I can find a good recipe but finding noodles that are as easy and as tasty as the udon or soba noodles that I get would be ideal!

Tonight was the last night of Dad’s stay with us so we went to Lime Orange again as he’d never experienced Korean food before. We ordered the delicious Pa Jeon again and we recommended the famous seafood bibimbap, which he really enjoyed. Mark and I obviously couldn’t order that so instead we went for the beef bulgogi. I’ll be totally honest, I think I’ve had better at other Korean restaurants and I found this version to be a little bit peppery, but it was enjoyable nonetheless. We ordered some cucumber kimchi this time too which was lovely and I personally much prefer it to regular kimchi. 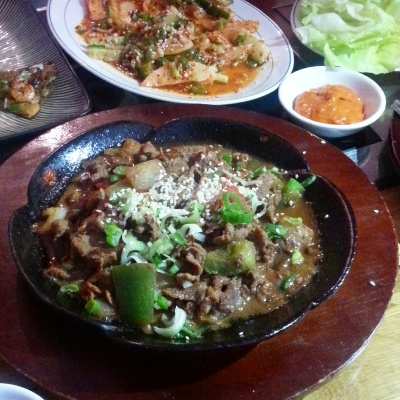 Today was St George’s day so this time we were looking for something English and we went with Toad in the Hole. I was pretty nervous about making this as I’ve witnessed mishaps in the past 😛 I thought this looked like a simple enough recipe and got as far as stirring the batter together before I started to wonder how it was going to rise because the ingredients didn’t seem to add up. I decided to scroll down to the comments in case someone had said anything useful and I got a bit worried that some of the reviews said it was the worst recipe they had ever come across! Anyway the original recipe writer had commented that using 3 eggs rather than 1 works much better so I followed that guidance – and just in time too! Lesson learned: always read the comments at the bottom of an online recipe before you cook! I left the dish cooking for the whole 45 mins given and resisted all temptation to open the door and look inside! Eventually I braved getting it out and it turned out a treat!! I was so proud of myself! 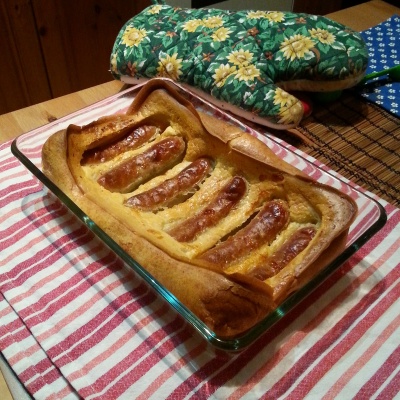 We were looking for something quick tonight as we often get home from work fairly late and Mark was keen to pack and get an early night before his trip to Hamburg for the marathon this weekend. This meal is one that my parents love to make and made use of some of our leftover goat’s cheese. It’s so quick and easy you just pop the mushrooms in the microwave for about 2 minutes on full or until there are some juices coming out, top with the chilli jam and soft goat’s cheese, then return them to the microwave for about 1.5 minutes or until the cheese is melted over the mushrooms. 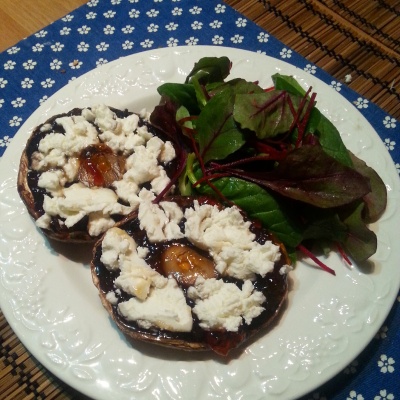 Tonight was another of Marks cousin’s Feast of Nations events and tonight’s cuisine was Argentine. Unfortunately for Mark he was now away in Hamburg for the weekend and so I went along to feast on huge piles of meat without him. That’s no exaggeration either – there were literally piles of meat brought to the table with different cuts of beautiful steaks, sausages, sweetbreads (a first for me but delicious) and some melted provolone cheese thrown in for good measure, all served piled up on a sizzling hot plate. The restaurant also had a huge range of Malbec wines so we sampled a few bottles between us of one of those. Needless to say it wasn’t the cheapest experience but it was worth it for the amount of tender, delicious meat we had (and wine!). I have to also mention the side of pickled aubergines that we had which were so good that I searched for a recipe as soon as we left the restaurant! I should also mention the desserts too and in particular the crepe with Dulce de Leche. To. Die. For. I would definitely recommend this little restaurant near London Fields and will be going again some time when I’ve saved up a bit! We were seated “outside” but it’s actually a little covered area at the back of the restaurant and is really cute. 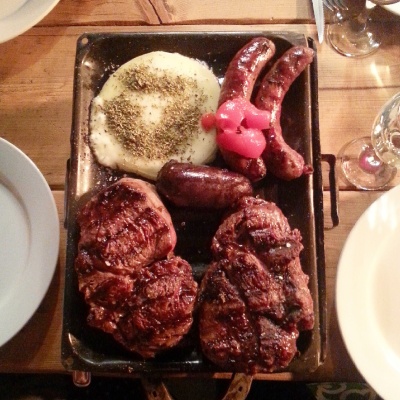 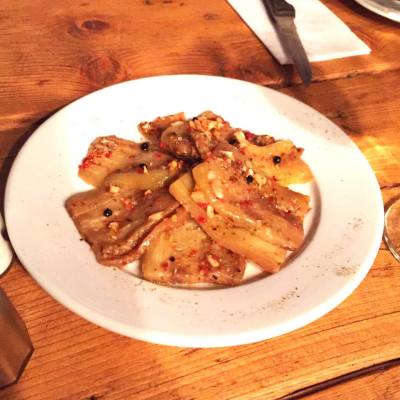 I was pretty stuck for ideas tonight but had a couple of sausages to use up from St George’s Day. I happened to phone my mum and she suggested sticking them in an omelette which did the trick and was just what I needed as a quick, no-thought-needed dinner. Pretty simple to make, I just cooked the egg, added some chopped sausage, potato and onions, folded it over, and voila.

I was out this evening at a Product Management event at the BBC which was pretty cool as I got to see the newsroom, one of their radio theatres and even the tardis from Doctor Who. It did mean I needed to grab something pretty quick to eat beforehand so I went to the pop-up crepe stand in Old Street Station, Les Deux Amies. I went for the special as it just sounded divine and it didn’t disappoint! Unfortunately, I don’t know whether they have a permanent shop anywhere that I can point you to as I think they currently just do events and catering. If you’re in the area in the next week or so though you just definitely head on over and try one of their delicious crepes! They are a great little company who have a lot of involvement with charities and you can find out more on the “Values” section of their website. 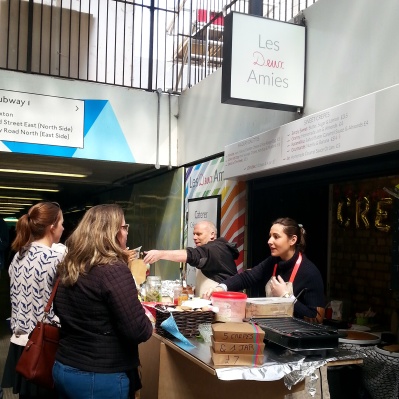