Can you believe I was in Singapore a MONTH ago and I’ve only just found it in myself to write this post about some of the highlights? I wrote a bit in this post about how the first month of being on the road has been at times overwhelming but I’ve gradually settled into my groove, met some fantastic people, and done some pretty cool stuff! Anyway, there were so many highlights from just a few days in Singapore that I’ve actually decided to split it into two posts (maybe I just like giving myself more to do?). I think that’s the best way not to overwhelm you with all the incredible things there are to do in this fantastic place.

Gardens by the Bay

This probably tops most people’s lists of things to see in Singapore, and for me it was a big part of what drew me to visit Singapore in the first place. The towering tree structures of the Supertree Grove are majestic and spectacular, but the gardens themselves are huge and I enjoyed walking all around them. It’s such a calm, green oasis yet it’s right in the middle of this bustling city-state. The flower dome was filled with all colours of rhododendrons for a seasonal display which was beautiful and meaningful for me in particular as Mark proposed to me while we were surrounded by these flowers. The place where I spent the most time though was the Cloud Forest with its cool indoor temperature and cascading waterfall that you can walk up and around and see loads of plants and orchids. I could have spent hours there just soaking up all of the beautiful plants and the cool air. 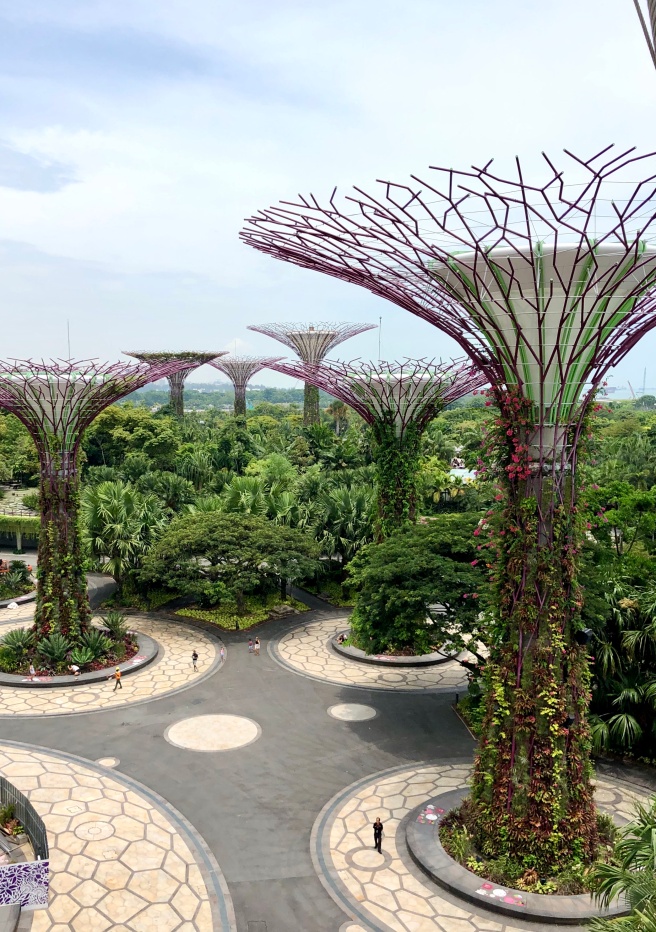 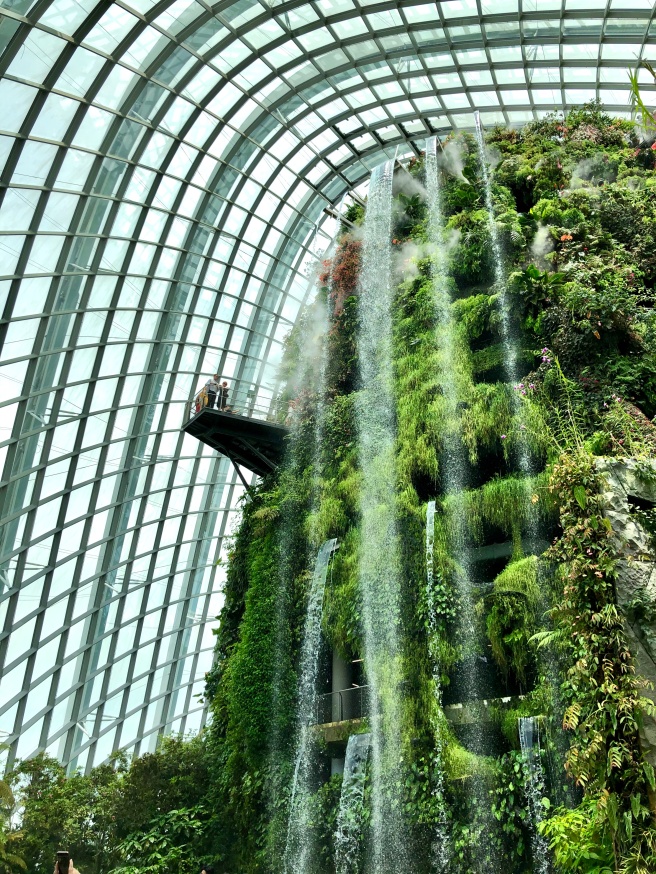 If there’s one thing more spectacular than the Supertree Grove trees, it’s seeing them lit up to music during the daily light shows. I lay down on the floor underneath them, almost oblivious to the crowds around me, looking up at the lights in absolute bliss. There is also a light show at Marina Bay Sands on a platform in front of The Shoppes where they project patterns onto a wall of water which was pretty cool. The same light show can be seen from the Merlion park which gives a different view of the show and the lasers that shine from the Marina Bay Sands hotel.

I was really keen to visit the ArtScience museum after reading about it and seeing some pictures on Instagram and Pinterest. The building is really impressive and the description of “Where Art Meets Science” was always going to pique my interest. The waterfall of lights that actually move around you where you choose to stand was awesome and I can see why it features a lot on Instagram, but there wasn’t much else to the museum if I’m honest. It looks like a great place for kids where they have play areas and cool games with light effects (you can draw a design in a piece of paper and watch it become part of the digital art display), but for adults with an interest in Art, Science and digital media, it was a little lacking. 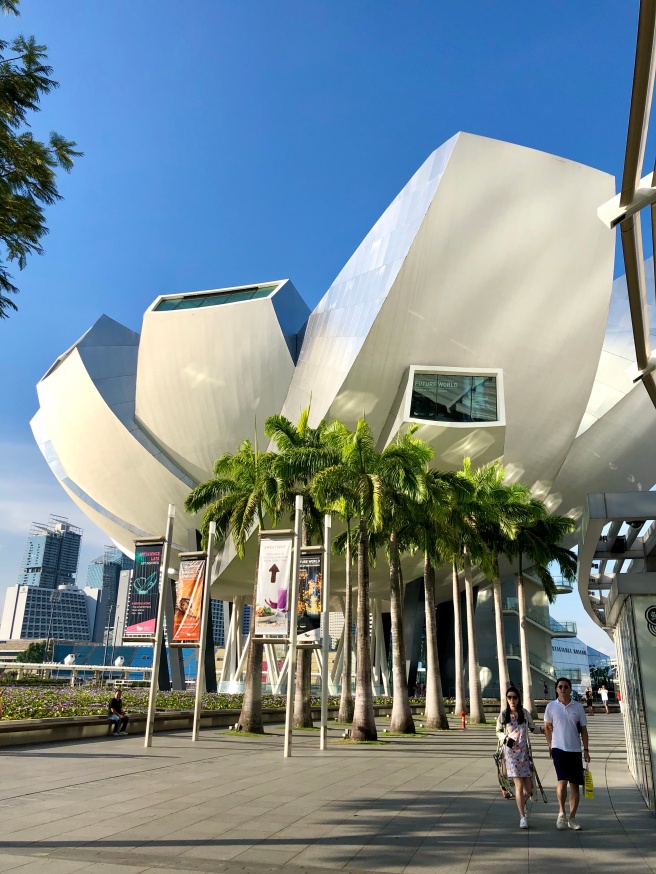 The Merlion statue is an iconic symbol of Singapore and has been relocated from its original location as the city has grown and evolved. It’s really a must see in Singapore so I was glad to go on my first evening in the city and see it lit up with the Singapore city skyline in the background. 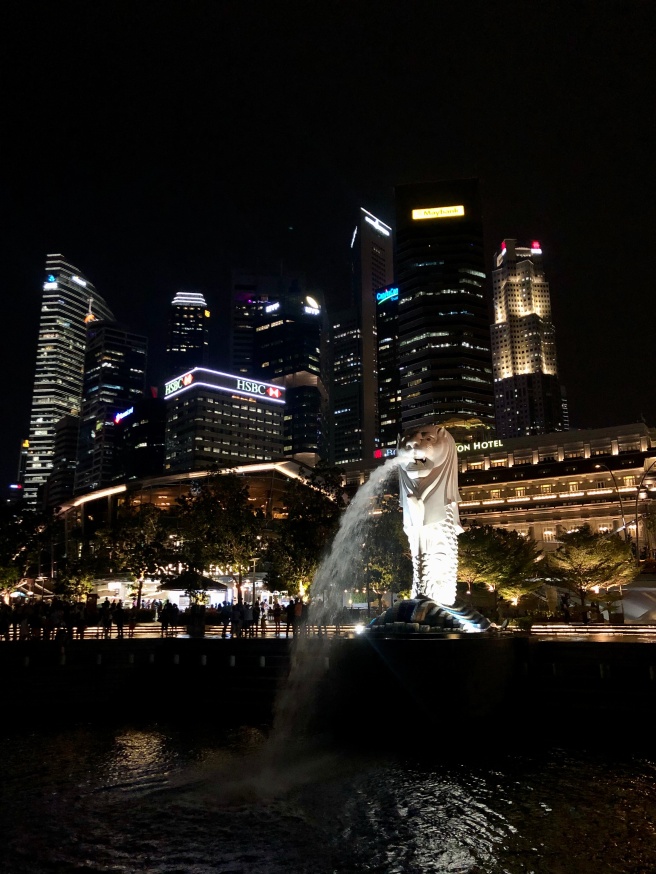 I love my plants – that’s why I love foraging and growing things – so it makes complete sense that I also love a botanic garden. I expected good things after seeing the Gardens by the Bay and because Singapore is the self-proclaimed “Garden City”, and I’m pleased to write that it didn’t disappoint. The Singapore Botanic Gardens has a range of different mini-gardens including a foliage garden and a rainforest garden (where I saw a huge lizard). Of course there is the insta-famous National Orchid Garden too so I had to see it for myself. The orchids are genuinely lovely and there is a huge variety of colours and shapes to see, as well as a VIP orchid house with orchids named after famous people like Angela Merkel and Margaret Thatcher! It is definitely an Instagram haven so there are a lot of selfie and photo opportunities if that’s your bag. 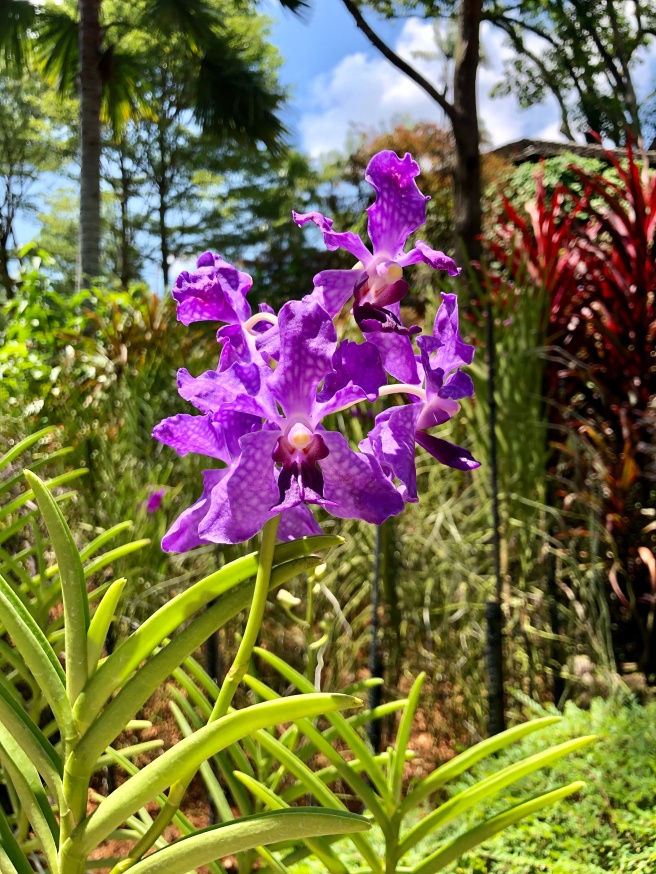 The last of my highlights for this Part 1 post has to be the unmissable Raffles hotel. Built during the colonial era and named after the founder of Modern Singapore, Sir Stamford Raffles (who actually only spent about 9 months in Singapore which I found interesting given how much is named after him), the hotel has recently been refurbished and looks grander than ever. It’s great to look around during the day when the shops and boutiques are open, but the thing you have to do is visit the Long Bar for a Singapore Sling where this delicious gin cocktail was invented. I had heard more than one person tell me that they went to Raffles for the Singapore Sling but ended up having a soft drink because of the eye-watering prices, so I went in prepared at least. It is mighty expensive for a cocktail – triple what you would pay for a decent cocktail in a nice bar in London – but when in Rome! They also serve peanuts in their shells which you’re genuinely meant to wipe onto the ground. I found it really strange – especially when you’re walking in and out of the bar with them crunching underfoot, but it certainly adds to the experience!

I can’t wait to follow up with Part 2 of my highlights from Singapore and share more of what I’ve been doing – albeit a little late. As always, food plays a big part in any travel for me so I already shared my biggest highlight in this post about Singapore’s great food scene. Meanwhile I’m going to get back to relaxing on a beach somewhere in Indonesia.

One thought on “Singapore Highlights Part 1”