Today is PANCAKE DAY! Traditionally a day of indulgence before the long fast of lent, but nowadays just an excuse for…creative pancake toppings! I’ve road-tested a few new ideas this year and some of them worked brilliantly so here’s a few ideas you can borrow to spice up your pancake day and impress the family and friends.

Okonomiyaki is a Japanese cross between a pancake and an omelette, and so the concept lends itself perfectly to being reworked into a savoury pancake for pancake day! Instead of mixing the cabbage and other fillings in with the batter, stir-fry them separately before wrapping them up in a savoury crepe and topping them with the delicious okonomiyaki staples of okonomiyaki sauce, Japanese Kewpie mayonnaise (no other mayonnaise will do for true okonomiyaki flavour), and nori flakes (which can all usually be found in larger supermarkets or asian food stores). You could add in some noodles as well for a hiroshima-style okonomi-pancake!

Here I’ve used a 50:50 buckwheat : wheatflour batter mix with egg, which I feel is more appropriate for the okonomiyaki idea rather than a drier batter with more buckwheat or without egg. 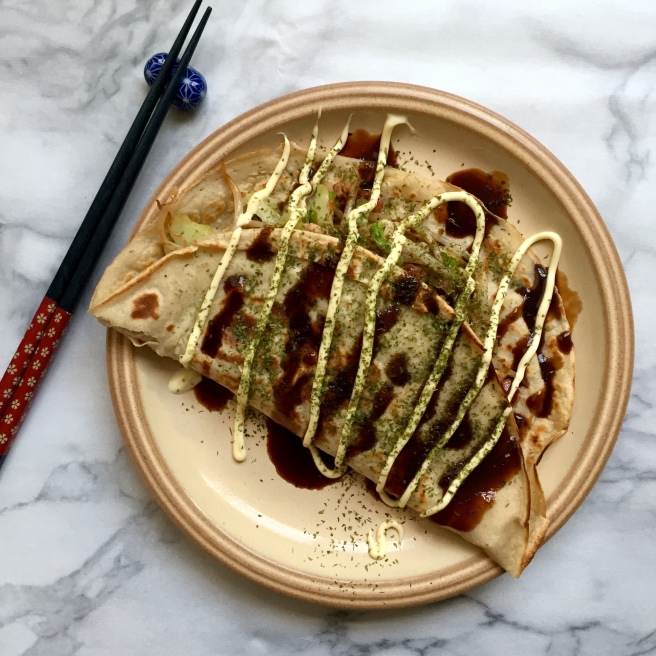 For the pancake, mix together 125g of buckwheat flour, 125g of plain flour and a pinch of salt in a bowl. In a separate bowl, beat 1 egg and mix in 250ml milk and 250ml water. Add the wet ingredients gradually to the dry ingredients, stirring continuously to avoid lumps. Leave to rest for at least 20 minutes before using. Fry on a medium heat and turn over when you can see the edges are cooked. This mixture should make about 5-6 pancakes.

Fry some pancetta (about 50-80g per person) in some vegetable oil until browned, then add a handful of thinly-sliced cabbage, a handful of bean sprouts and half a thumb of fresh ginger per person. Stir fry until cooked and spread on to one half of each pancake. Fold the pancake in half and top with zig zags of okonomiyaki sauce, Japanese Kewpie mayo, and sprinkles of nori flakes. 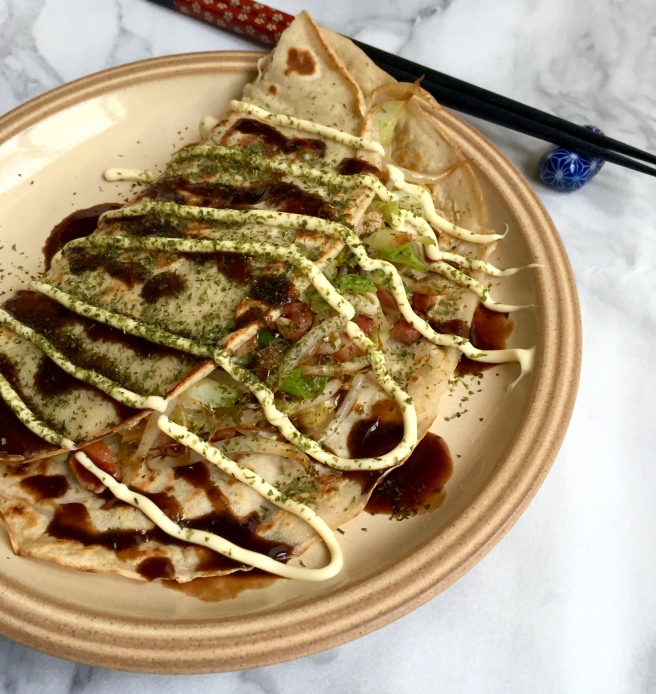 Continuing my long-time love affair with anything that blurs the boundaries between sweet and savoury, this feta, pine nut and honey pancake is really simple to make, but absolutely delish. Again, I’ve not gone for a 100% buckwheat pancake and have instead used another 50:50 batter as a nod to its sweet/savoury nature.

Follow the recipe for the savoury pancake used for the okonomiyaki-style pancake above and top with a handful of feta, pine nuts and a drizzle of honey.

I had a bit of fun recreating the magic of this traditional middle-eastern treat with a baklava-inspired pancake. Baklava tend to be incredibly sweet, but that’s because they’re usually very small and not intended to be eaten in great quantities, so I’ve really pulled back on the sugar in this recipe. I wanted to accentuate the other flavours that can sometimes be lost in the sickly sweetness of some baklava – the cardamom spice, the fragrant orange blossom notes and the nuttiness of the filling. In order to capture the whole character of traditional baklava, I baked some filo pastry until crispy and golden to sprinkle over the top for that final flourish. Best enjoyed with a lovely mint tea!

For the pancake batter, mix together 125g plain flour with 50g caster sugar and a pinch of salt. In another bowl, beat 1 egg and add 250ml milk. Gradually add the wet ingredients into the dry ingredients, stirring continuously to avoid lumps. Leave to rest for at least 20 minutes before frying on a medium heat until browned on each side.

Bake a few sheets of buttered, pre-rolled filo in a 200°C oven (or 180°C fan-assisted) until golden and crispy. Whizz together 50g walnuts, 25g pistachios, and 25g almonds per person in a grinder or blender until they become small chunks. Heat in a saucepan with 25g butter and 1 tbsp caster sugar per person until all combined. At the same time, in another saucepan, again per person, heat the juice from half an orange, 1/4 tsp orange blossom water, 50ml water, 1tbsp honey and 1tbsp caster sugar to make the syrup. Spread the nut mixture down the centre of each pancake, drizzle with some syrup, roll the pancake together and top with a generous drenching of syrup and some crushed filo sprinkles. 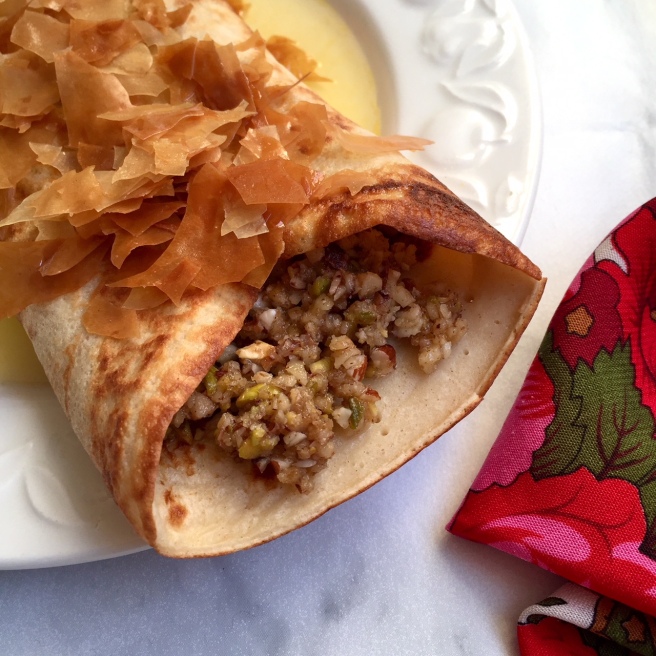 Plums with Pedro Ximénez and chocolate

This is a real grown-up pancake! The deep colours of the plums and that rich, silky chocolate really lure you in – perhaps this is one you could keep a secret for tonight and make for Valentine’s Day tomorrow and score some brownie points with your significant other…or yourself! You could even try cooking a heart-shape into the pancake…too far? OK I’ll stop.

Use the recipe for the pancakes in the baklava-style recipe above for this version too. For each person, heat 2 chopped plums with 1 tbsp caster sugar and 2 tbsp Pedro Ximénez sherry until they start to soften. Meanwhile, melt your chocolate (the amount is entirely up to you – I won’t tell a soul) over a bain marie. Once the plums are cooked and the chocolate melted, place the plums onto the pancake and fold into quarters, then drizzle the melted chocolate over the top with a fork.

Have you got any favourite creative pancake toppings? What do you think of these ones? Share in the comments!