We visited this restaurant with Mark’s sister Claire and cousin Liz on Claire’s recommendation. I was sold as soon as I saw the menu, but was going to have some trouble choosing until Claire strongly recommended we try the seafood bibimbap. We all ordered the same and heard the sizzling bowls before we saw them! We were able to pour in our own hot sauce which I think is great because people’s tastes are so different and korean food can be really spicy. It was great in principle but as I was pouring the lid popped off and I got a little more than I had bargained for but actually it wasn’t too much for me and I still found the dish totally delicious! The best thing about it aside from the perfectly balanced hot sauce, the intense bursts of succulent octopus, squid, and mussels, was the little bits of rice that had crisped a little and slightly caramelised in the sauce at the bottom where the bowl was so hot – yummy! I also ordered the Pa Jeon to start which are spring onion pancakes with a seafood in that come with a dipping sauce. I order these every time I go for Korean food because I just love them and these ones are hands down the best I’ve tried. 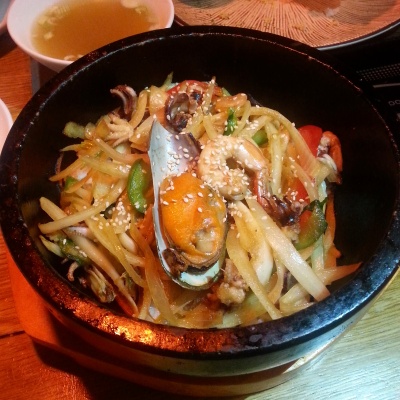 We had sun-dried tomatoes to use up and Mark found this simple salad dish. It was really tasty and made a great lunch the following day to. I was pretty satisfied with this as a dinner because I’d had quite a big lunch during the day, but I think on a regular day I would probably see this more as a side-salad and serve it with something more substantial. 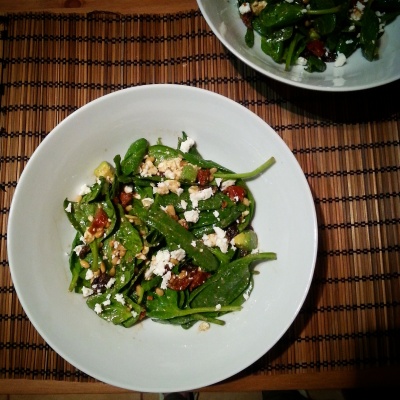 I don’t have much to say about this other than chicken + barbeque + pasta = simple, tasty dish! Will definitely make this again. 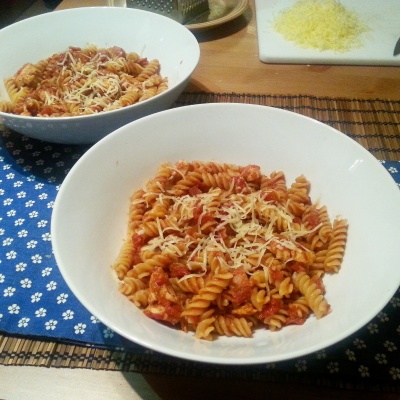 I found this idea on pinterest with a load more variations on the hot dog theme. As we had some streaky bacon left over from our pasta last night, I thought today would be a great opportunity to try making the BLT version. Wrapping the hot dogs in the bacon was easy enough but cooking them without it all unwrapping again was more of a challenge! Next time I might try using cocktail sticks to hold it together but then it might be difficult to turn the hot dogs to cook them all over… Anyway, once cooked and placed on a finger roll with lettuce and tomato and topped with mayo, it didn’t matter any more because they were delicious. 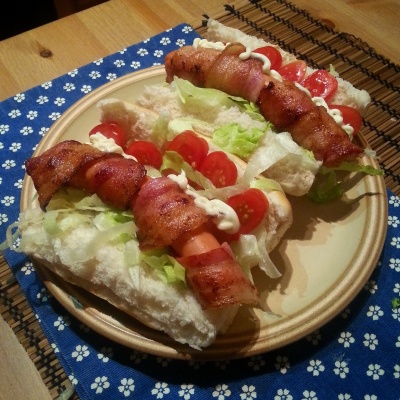 After making this recipe we found ourselves with quite a few leftover hot dog sausages so on another day we cooked them up, chopped them and had them as a snack with some HP sauce – YUM! 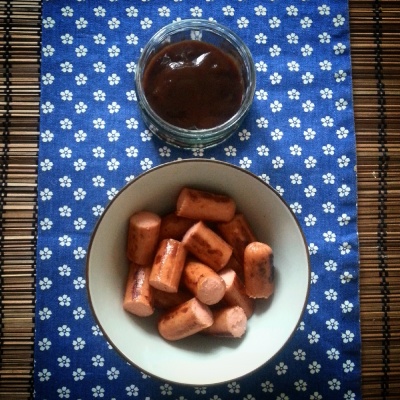 Mark found this recipe for our dinner to use up our leftover sweet potatoes. I have to admit that I was a bit unsure how the recipe would turn out when I read it. It was tasty enough , but I think overall it was a little bit too sweet so next time I’d look at how to balance it out a bit more. 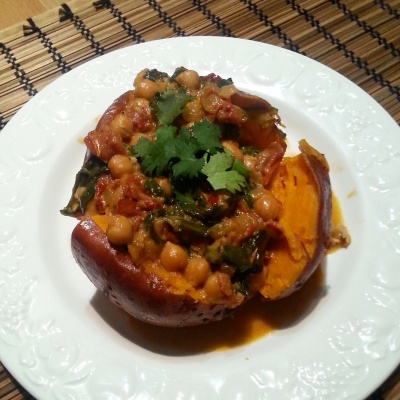 Tonight we were in Nottingham with my family for Easter, but particularly for my little nephew’s Baptism! Mum and Dad decided we’d get Chinese as there were lots of jobs to do in preparation for the party after tomorrow’s service so a zero-effort dinner was welcomed. This Szechuan-style beef was delicious but not particularly spicy so didn’t quite match our expectations from the menu in that respect. 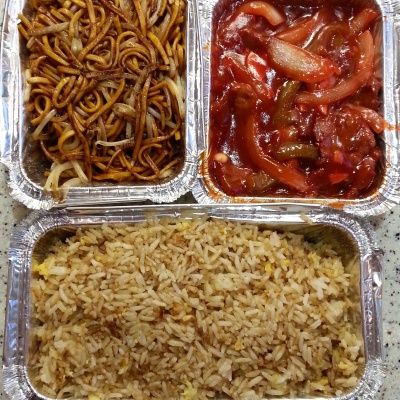 Mum prepared this delicious Easter dinner for us. The flavours of the honey chicken, walnut pesto and fresh pomegranate arils worked together beautifully! I’ve linked to the recipe above but I’m not sure how long it will be there so get the recipe while you can 🙂 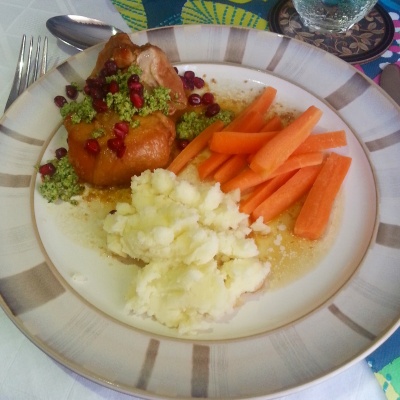 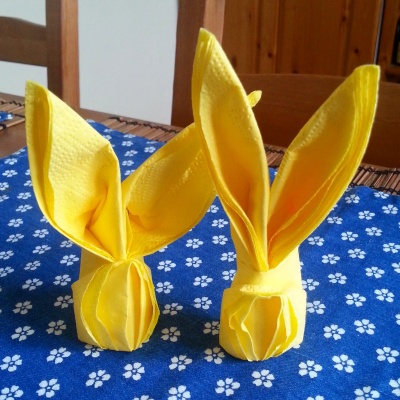