So if you’ve made it to this post you are probably already aware of what we’re doing but I’ll recap just for the fun of it. Mark (my other half) and I have set out on a 365 project where we won’t be repeating a main meal in 2015. Just the main meal though – we’re not completely crazy! We’re hoping to discover new dishes, recipes and maybe even skills and just get a bit more creative with what we cook and eat. Eating outside the box!

So now you get the idea – easy peasy right?!

We weren’t initially going to do a blog, but then we had a few requests and started to get excited about the idea! We’re going to try to keep you all posted with the dishes we’ve had, what we’ve thought of the recipes we’ve cooked or the restaurants we’ve eaten at, and just our general foodie experiences. We totally expect there to be a lot of trial and error with how/when/what we post. It will certainly be a learning experience! I will also attempt to improve my food photography skills especially given that all of the photos I have so far have been taken in our kitchen (yeah…not greeeeat lighting), on my phone, and with very little editing, if any.

So here’s a sum-up of our first week (crappy photos galore) – one down and only 51 to go!

So the curries in this book look really fun to make but they do involve some time and effort compared with a lot of other recipes. That’s the reason we chose to do this one on New Year’s Day when we new we’d have some good prep time. Definitely learnt some new techniques and realised that we need to invest in a good blender sometime soon!

This was cooked for us by our lovely friends Luke and Louise during a “Clueless” & “Mean Girls” movie night – classy. Obviously, like all of Jamie’s 20 minute meals, this is a great recipe as long as you don’t actually expect it to take only 20 minutes. I wasn’t totally sold on paneer, but that’s just my personal taste – the sauce was great.

This was really yummy and a simple enough recipe. We weren’t sure whether to cut the chicken up and in the end we cooked the legs on the bone in the sauce. My only comment was that this was quite rich in a way I wasn’t expecting.

(check out her blog at agirlcalledjack.com)

This was really easy to make – just mix together the ginger and turmeric dressing and cook some cauliflower florets. I added the recommended nuts and chopped chilli peppers too which added a bit of life as I didn’t feel the ginger punched through as much as I was expecting.

This was so easy to make! We actually used frozen rhubarb from Mark’s Mum’s garden last year which worked just as well as fresh – just meant adding a bit more water and being a bit careful not to dry out the salsa. The combination of smoked mackerel and the rhubarb was a revelation to me and so quick and easy for a work night. I would definitely recommend this and will make it again for lunch sometime.

So we tried the method of drying the mushrooms given in this recipe and it just didn’t work. I’ve since managed to dehydrate mushrooms with the oven on the lowest heat it will manage and with the oven door slightly open and that worked pretty well. It’s a good idea if you have mushrooms hanging around that you’re not sure you’ll use in time. However, for this recipe we use dried porcini mushrooms and it worked out fine after a bit of recipe interpretation.

This dish came about because we had a tonne of cherry tomatoes left over from our New Year party. Yep, even after Mark had been at them and we had been grazing on them with our lunches for a few days. It was time for us to take drastic action! It was super easy and quick to cobble together as well as being pretty healthy. I halved the cherry tomatoes, seasoned them with some salt and pepper and popped them in the oven to roast off a little. Then just cooked the pasta and once that was ready, stirred in a little olive oil, the cooked tomatoes, some garlic puree, grated Parmesan, and some chopped frozen basil (one of these new Sainsbury’s gems – really good if, like us, you prefer not to use dried herbs but struggle to get through store-bought fresh herbs before they turn into brown mush or if you haven’t been all that successful at growing your own either). Really simple dish that is quick to put together when you’re busy, but tasty too. 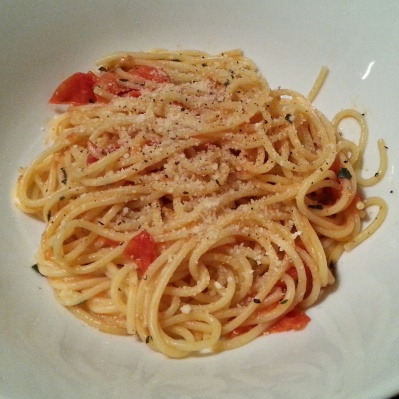