I recently shared my self-guided walking tour around Georgetown, Penang and I wanted to share another that I did in Melaka. I visited Melaka towards the end of my time in Malaysia because I was leaving from Kuala Lumpur airport and Melaka is just an hour or so from KLIA. As I had already explored the capital, I figured it was a good opportunity to experience a different town. I had read a little bit about the colonial history of Melaka (it was colonised by the Portuguese, followed by the Dutch, and finally the British until 1948) and others had told me it was a small but cool place to visit, but the thing that really put Melaka on my radar was The Huskitory – more on that in this post!

I began my walk in the Melaka museum complex at A Famosa, the remains of a former Portuguese fort gate. Little of it remains after it was destroyed when the British arrived. Still it was interesting to see the Portuguese artefact reflecting that period of Melaka’s history. 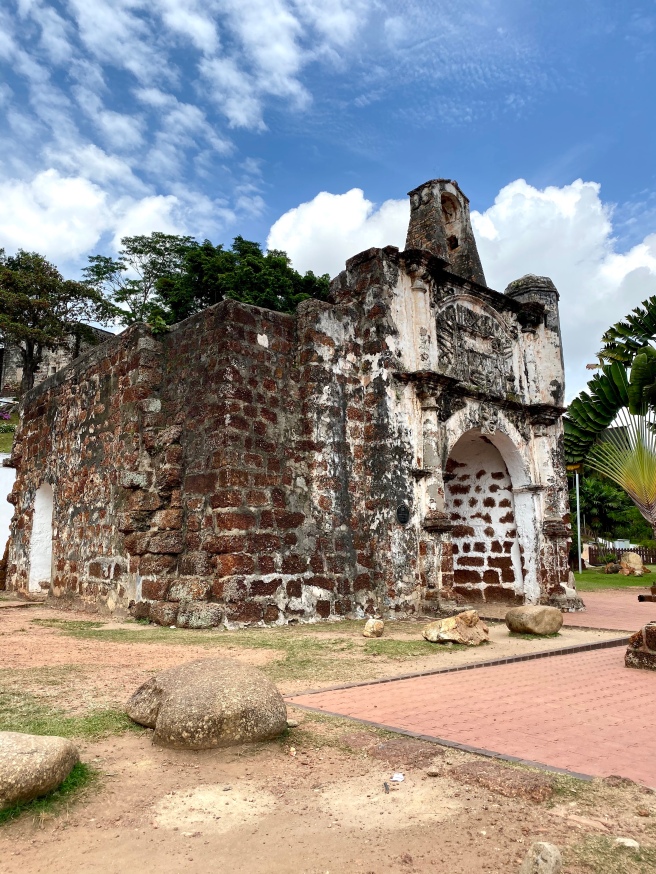 Near to A Famosa and up a small mound is the Church of St Paul. Once again the bulk of this Portuguese building has been destroyed over the years, but again it’s a piece of Melaka’s colonial puzzle. Once the Dutch arrived in Melaka the church became Dutch Reformed, hence the Dutch tombstones that line the walls. The statue outside (not pictured) was built in the 1950s and depicts St Francis Xavier, a missionary who visited Melaka and this church regularly. 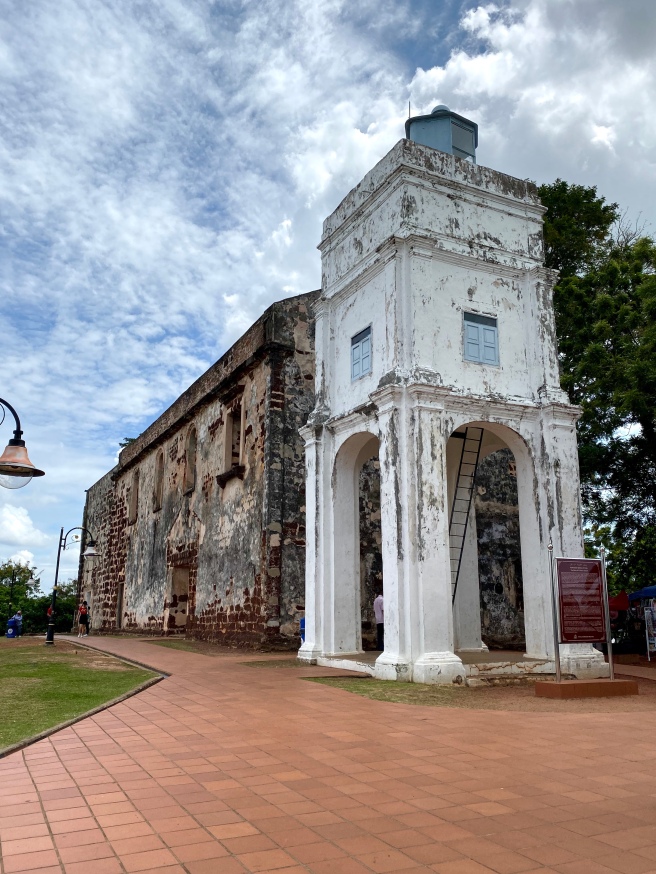 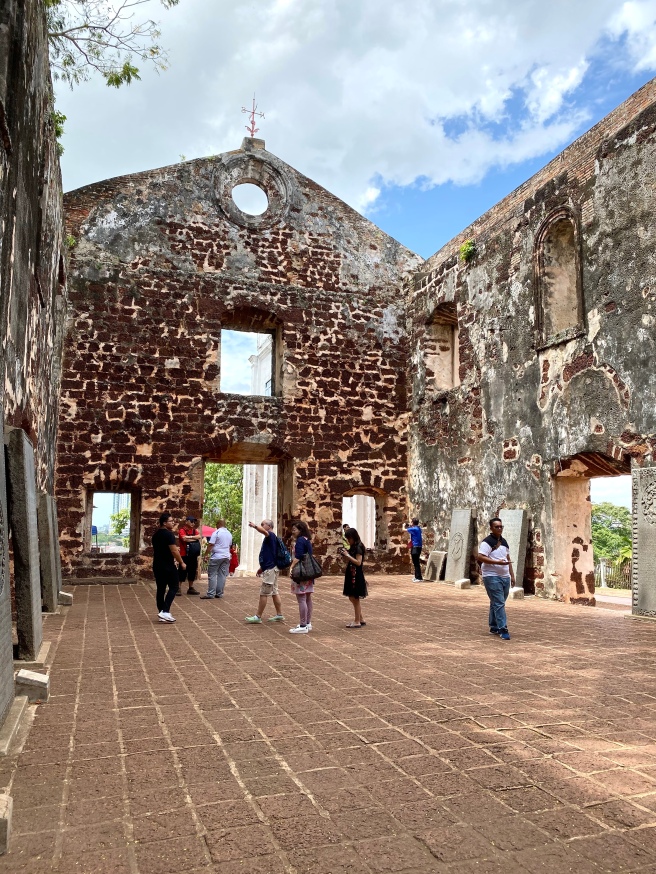 Next I wandered down the hill past the Admiral Cheng Ho Gallery where they have an old fire engine and bulldozer displayed outside. I kept to the right hand side of the car park and reached the red brick Dutch Stadhuys, clock tower, Christ Church and of course a little windmill. There were plenty of Melaka’s famous trishaws each with their own theme including Hello Kitty, Minions, or everyone’s favourite: Baby Shark. 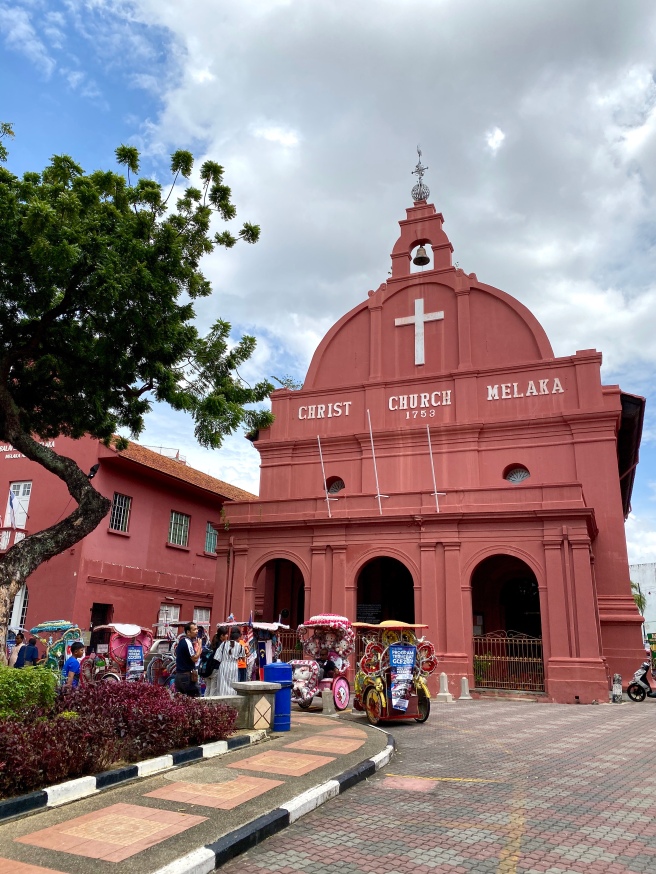 Across the bridge I turned right and followed the walkway along the river where there are a few little cafes and eateries and some cool street art. This is where you can find the famous Kiehl’s Street art building with its colourful geometric pattern. At the Kiehl’s building I turned left on to Jalan Tukang Besi where I popped in to have a look at the Orangutan House with T-Shirts and original art works by local artist Charles Cham. 

I could see on Google Maps that there was some street art featured and so I turned right on to Jalan Hang Kasturi before immediately turning right again on to a little lane with a number of murals depicting local people and trades.

Cheng Hoon Teng Temple is beautifully maintained Buddhist temple originally built in the 1600s. I loved the colours and intricacies of the wood carvings and paintings. On the way to the temple I also walked past Kampung Kling Mosque which is an impressive sight. 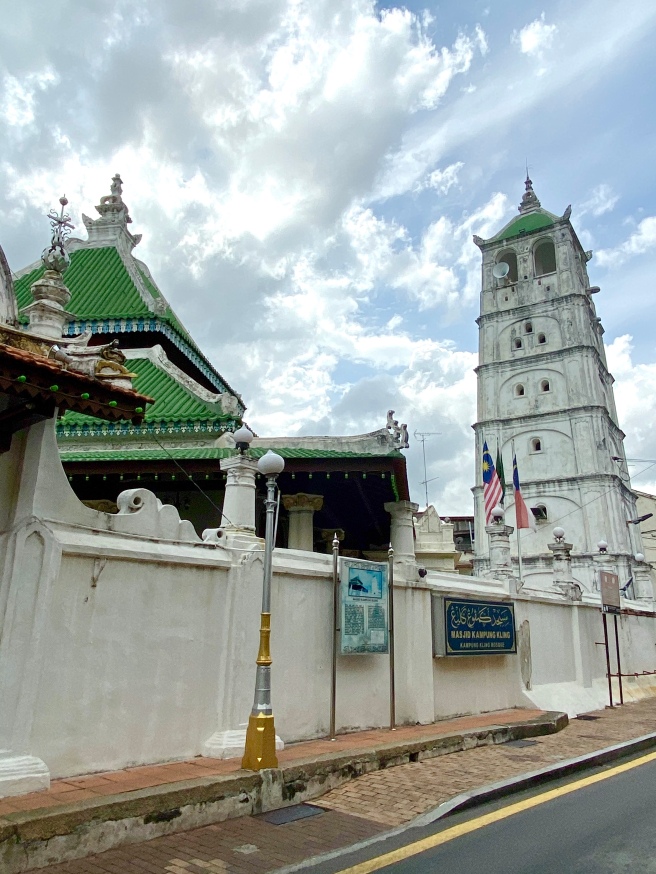 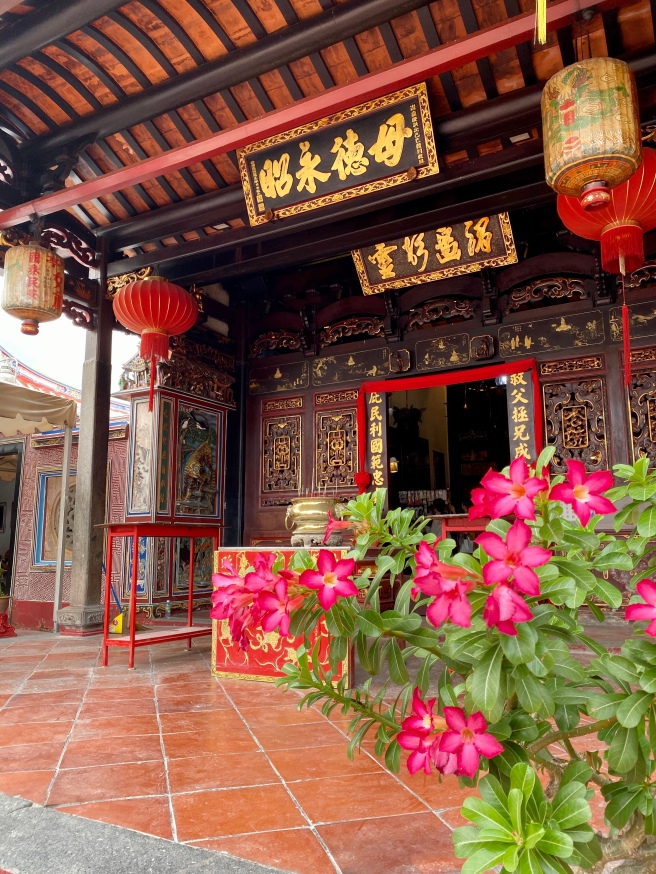 I happened to be in Melaka on a Friday evening, the first night of the weekly Jonker Street Night Market which runs every week from Friday to Sunday. The roads were closed by early evening, market stalls lined the street and locals and tourists alike flocked to buy food and knick knacks.  I tried a coconut shake and was tempted by the cups of tiny crispy fried crabs, and after a while I wandered back to my hostel when the crowds got a little much.

It didn’t take long to walk around the main sites of Melaka, but I enjoyed seeing the colonial history recorded in its architecture and the modern, artsy cafes, street murals and general laid back vibes. I would definitely recommend Melaka to anyone planning a Malaysia itinerary if you have long enough.

One thought on “A Self-Guided Walking Tour Around Melaka”