Aside from its major foodie credentials, Georgetown Penang is also famous for its art. It has become particularly famous over the last few years for its street art – no doubt thanks to Instagram – but I was excited to find far more of an art scene under the surface.

Easily the most famous of Georgetown’s street art is that by Ernest Zacharevic. The images of children on bikes and swings, playing basketball or sitting on a motorbike have become iconic despite being fairly new features of Georgetown’s historic quarter. These works were originally reviled by the local government, but they have become a huge draw for tourists and so they became the driving force for funding of local art projects. They are all located in a fairly small area of the historic quarter not far from the Clan Jetties and I easily found my way around all of them in about an hour using Google Maps to find out their locations. I went at 7am and felt like I had the whole town to myself so I definitely recommend biting the bullet and heading out early.

After the success of Ernest Zacharevic’s works, the local government decided to put some funding into another street art project. They brought together local cartoonists with local iron/steel workers to design hundreds of steel sculptures that are dotted all around the city. Each one tells a story about the local area where it’s located and it was an attempt to support the local steel workers in what was a dying trade. Apparently funding for the project has since ended, but there are a fair few of the sculptures and it’s fun to try and decipher the stories.

After learning about Malaysian batik during my visit to the National Textile Museum in Kuala Lumpur, I was keen to visit Penang’s Batik Painting Museum. Batik painting is an art form originating in Penang where artists started to use the wax-resist technique to create works of art rather than patterns for fabrics used primarily for clothing. I was fascinated by the range of styles as I walked around the three floors of the museum and spent a fair amount of time taking it all in. I was the only one there so I ended up chatting to the chap at the front desk who told me all about the origins of this art form and the original master who developed it. He offered to show me a video of one of the works in progress and I was in awe of the level of detail, patience and rigour with which the artist applied the wax and dyed the fabric in stages, reapplying the wax with each colour change. It blew my mind how complex a process it is and the skill the artists must have to possess to get the amazing results on show in the museum. 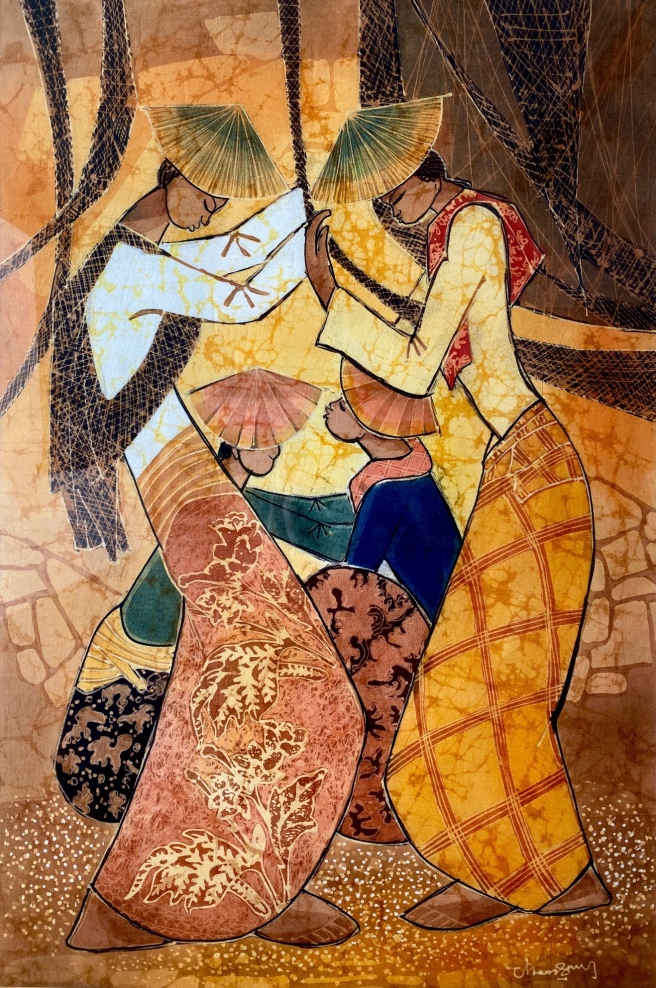 The great thing about hostels and meeting other travellers is that you get sneaky insights in some of the best things to do in the area that you might otherwise have overlooked. My roommate told me about Hin Bus Depot, an old Depot that has now been converted into an art space. I was immediately keen to check it out! There is a local craft market on a Sunday so I made sure to visit when the market was on. It was a beautiful sunny day and there were local families coming to enjoy the market and the atmosphere. I loved the range of handicrafts on offer and found it very different to the souvenir markets dotted around the town. It felt more like a weekend farmers market but with handicrafts rather than food & produce. I wandered around the market stalls, the art installations and then sat with an iced coffee watching the world go by.

ChinaHouse was another gem that I found by chance. My hostel has a little flyer with local events happening in the week and I noticed an exhibition by Malaysian artist Rebecca Duckett-Wilkinson. The exhibition was called “Forbidden Fruit” and looked at the connection between sex and botany, with a focus on the female form and the attitudes of men towards women. I walked around the exhibition, had a peek at the boutique, and also enjoyed a tasty lunch in the downstairs cafe.

Unique Penang Gallery is a little shop on Love Lane with a sister shop on Chulia Street opposite where I was staying. They sell beautiful original artworks, prints and postcards by the shop owner who is a local artist. I fell in love with her colourful, whimsical style and couldn’t resist making a purchase. As I was looking around the Chulia Street store, a huge thunder storm broke and the rain was so heavy I was basically stranded even though I was only across the road from my hostel and I had my umbrella. The thunder was so loud that it set off a car alarm outside! The lady in the shop, who turned out to be the artist’s mother, was so kind and pulled up a chair for me to sit with her while we waited together for the storm to pass.

During one of my wanders around the town, I happened across Art Lane which seemed to be a public space for street artists to come and paint and there were a real variety of styles and messages. I imagine some were commissions, and I don’t know how many were by local artists, but it was an interesting wander through nonetheless.

I ended up in Penang for a whole week to soak up as much of the great food and art that I could. I left full of food and creative inspiration and I can definitely imagine coming back sometime for more!

3 thoughts on “Art in Penang, Malaysia”