Penang is famous in Malaysia, perhaps even throughout the world, for its food scene. Whether you’re eating at a local restaurant or one of the many street food markets, you’re bound to find some seriously delicious fare. It’s probably unsurprising then that I decided to extend my stay in Penang to give myself more opportunities to sample the best this city has to offer.

It can be tricky visiting a place like Penang where the street food scene is such a big part of the food experience. There are so many hawker carts and stalls that you could end up overwhelmed by the choice. After an awesome street food tour experience in Hanoi, I decided to look for one in Georgetown to get some insider intel on the local food culture and the best places to get it. I came across Heritage on a Plate Food Tours after some online research and got in touch via their website to book. Despite my enquiry being pretty last-minute, I got a reply in record time and was able to book it in for the second night of my stay.

I met my guide Danny and soon realised that I was the only one to have booked that evening and so I had the entire tour to myself. After a quick chat it was clear that Danny was incredibly knowledgable and super friendly. Straight away he began tailoring the tour not only to my tastes but also my appetite, meaning that I didn’t have to worry about filling up too much and being uncomfortable, but knew I wasn’t going to miss out on any information. We headed out for our walk around the city and started in Little India where I was able to try local sweet kolkatai dumplings, see the street sellers making puthu, eat bafflingly delicious egg samosas and roti jala with mutton curry, all while learning so much about the local area and it’s history and customs. 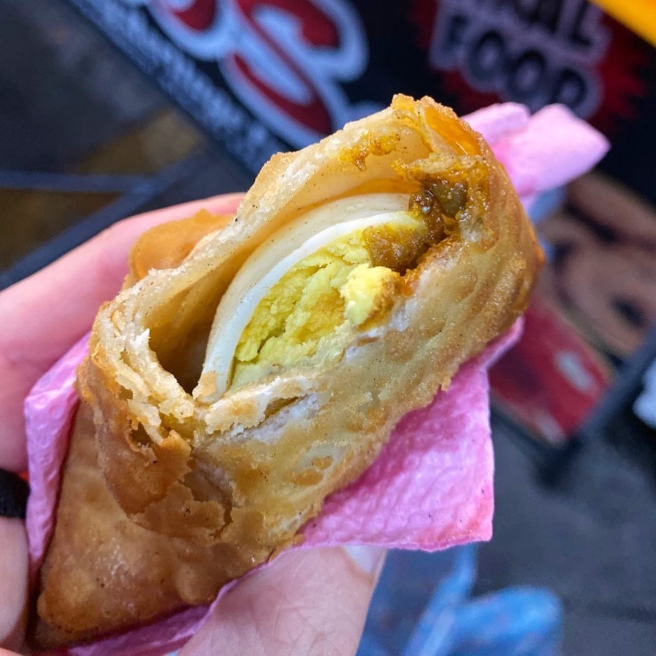 We then moved to the Chinese quarter where I tried the bbq pork wan tan mee noodles at Hong Kee noodles. I was bowled over by the texture of the noodles and the flavour of the broth. I knew I was going to have to come back sometime for another bowlful – and I did! I made sure to come back when they were making the noodles with a traditional method using a huge bamboo pole to compress the dough. I also tried ambra juice made from a local fruit that’s apparently shaped a bit like a small green mango. Danny asked me what I thought it tasted like and I replied with the first thought that entered my mind – it tasted like the jungle!

By this point I was pretty much stuffed and we had walked around quite a while longer than expected. I was so grateful that Danny had given up even more of his evening to show me around and I really enjoyed chatting to him about everything from local colonial history to the current issues hitting the arts scene in Georgetown.

Another experience I like to find in cities with such a strong food culture is a local cooking class. Penang is the place to learn how to make Malaysian dishes and I couldn’t wait to try my hand at cooking them. Again after some online research I booked with Mypintu, run by a local Malay gentleman called Khalid. We met at 3pm and Khalid gave us a great introduction to the different local cuisines including Nyonya cuisine, as well as showing us the key ingredients used in Malaysian cooking. We learned to make char kway teow (stir-fried noodles), Malaysia’s national dish nasi lemak (coconut rice with sambal, dried anchovies and peanuts), we made our own sambal from scratch, roti jala (a “fishnet” roti that is made like a lace pancake), and Malaysian curry. I thought it was great that we ate as we cooked rather than cooking a lot of dishes and eating right at the end – it was a fair amount of food so it was good that we could pace ourselves a bit. It was actually tough to pick a highlight from this class! I loved the simplicity of the char kway teow and the diversity of the sambal that we made – I will definitely be using what I’ve learned when I get home. Most of all I really enjoyed being in a small group of just 4 people and being able to cook all of my dishes entirely by myself and tailoring to my own tastes.

A traditional breakfast in Malaysia is kaya toast made by spreading kaya (a sort of coconut jam) on to one slice of toast, butter on another, and sandwiching them together before toasting. This makes the kaya and the butter melt together and it’s absolutely scrumptious! I heard that Toh Soon Cafe was the place to go for their wood fired kaya toast and local sweet kopi (coffee). It was a bit of a walk so I was determined to get a seat when I arrived and saw how busy it was. The turnover seemed to be fairly efficient though so I wasn’t waiting for very long. The toast was simple but really tasty with a perfect kaya to butter ratio and I enjoyed the experience of mingling with locals and Malaysian visitors. 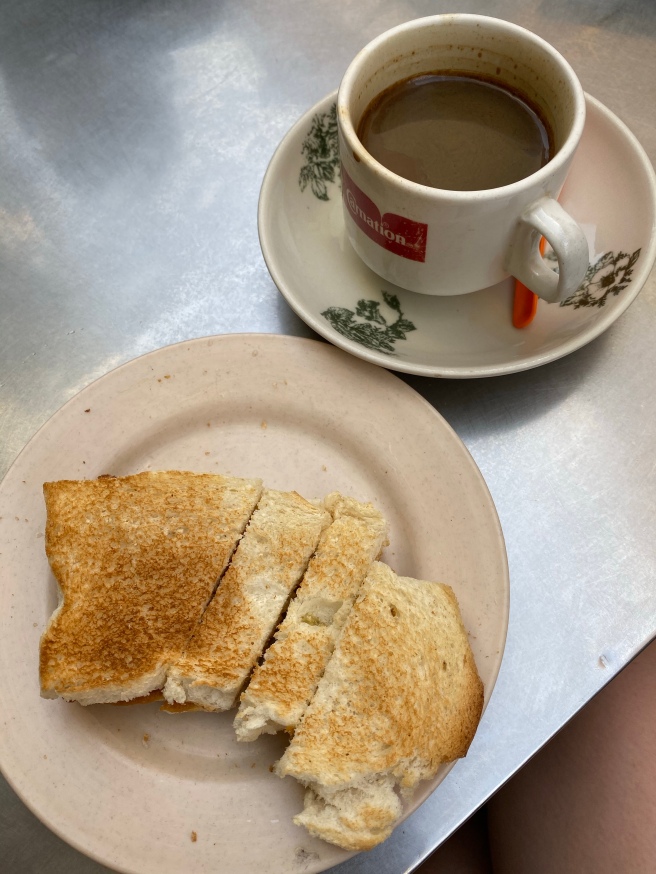 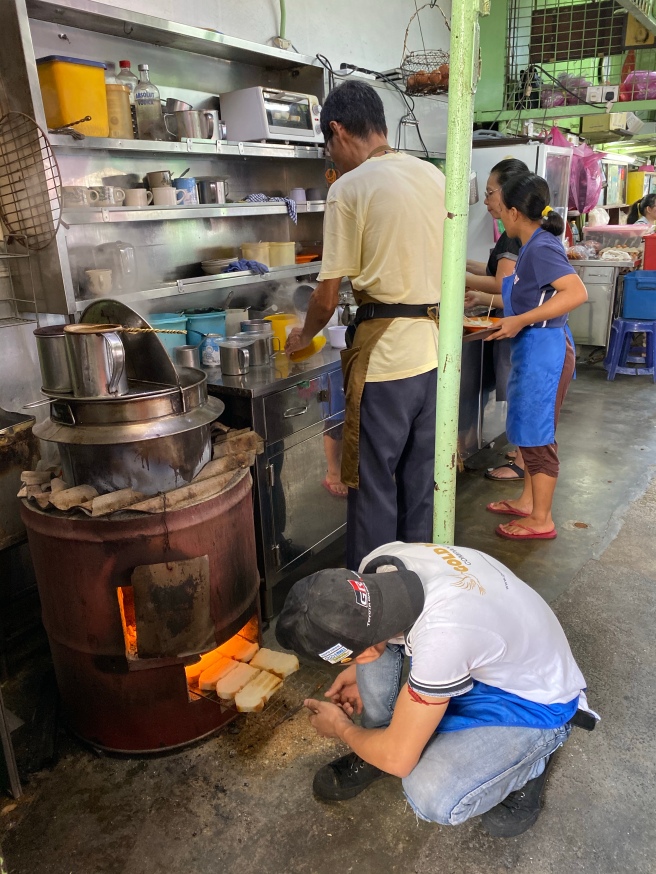 Two of the main night markets for street food in Georgetown are at Kimberly Street and Chulia Street. At Kimberly Street I tried the duck served with thick square noodles in a rich, dark broth topped with chilli and fragrant herbs. The seller was a slightly scary Malaysian women who ran a very tight ship with customers as well as her staff, so service was efficient if a little intimidating. The flavour was worth it though! At Chulia Street I was all about the curry mee with its chilli kick and yummy fish balls.

Another popular noodle dish in Penang is Hokkien mee, a spicy noodle soup made with prawns and full of seafood flavour. I walked about twenty minutes to find 888 Hokkien mee and the soup was worth every step. You could choose egg or vermicelli noodles (or both) and various other toppings as well but I kept mine fairly simple. Next time perhaps I’d add some pork belly.

Last on my list of things to try was nutmeg juice made from the fruit of the nutmeg plant. I had only ever even heard of using the spice which comes from the stone of the fruit and didn’t realise that the rest of the fruit could be used as well. It was only during the cooking class when Khalid was telling us about local ingredients and let us try some dried nutmeg fruit. He told us about the juice and I just had to try it! I found a tiny little place called 8 Happiness Cafe and bought some to sample. The juice was served with sugar syrup and sour plum which I might have left out, but the flavour was really unique and interesting.

I really felt like I was able to at least scratch a decent amount of the surface of the local Georgetown food scene thanks to the amazing street food tour with Heritage on a Plate as well as my cooking class with Mypintu. I certainly don’t regret spending more time in Penang so that I could get around more of the recommendations I received!

If you’ve been to Penang and have more recommendations then do share in the comments – I would love to see them!