San Sebastián is well known as a foodie destination – especially for the local pintxos – and it’s no secret that the region boasts the highest number of Michelin stars per capita in the world. Michelin starred restaurants aren’t the only way to experience incredible food in San Sebastián as my pintxos post will tell you, but as we were celebrating my 30th birthday during our trip we thought we’d push the boat out.

After researching countless options, all of which looked amazing, I managed to get a booking at Akelarre just a short drive out of the town. The hotel/restaurant is situated in the hills overlooking the sea, and the view from the restaurant is unbeatable.

We were welcomed and showed to our seats where our waiter explained the menu. The tricky thing was choosing our tasting menu from the three options. In the end we both chose the Classics menu made up of all of the restaurant’s most successful dishes over the years. It felt like the best way to experience the restaurant.

Before we even started with our nine-course menu we were treated to a generous number of exciting appetisers. The amuse bouche was a take on a Bloody Mary with a tomato base and fluffy foam dome sat on top. We ate prawn pastries served like little pillows and crispy “egg & bacon” discs dotted with little pipings. The highlight for me was the goat cheese butter printed with a quirky design served with thin toasts. It was silky smooth like butter, but with an unmistakable goat’s cheese flavour. 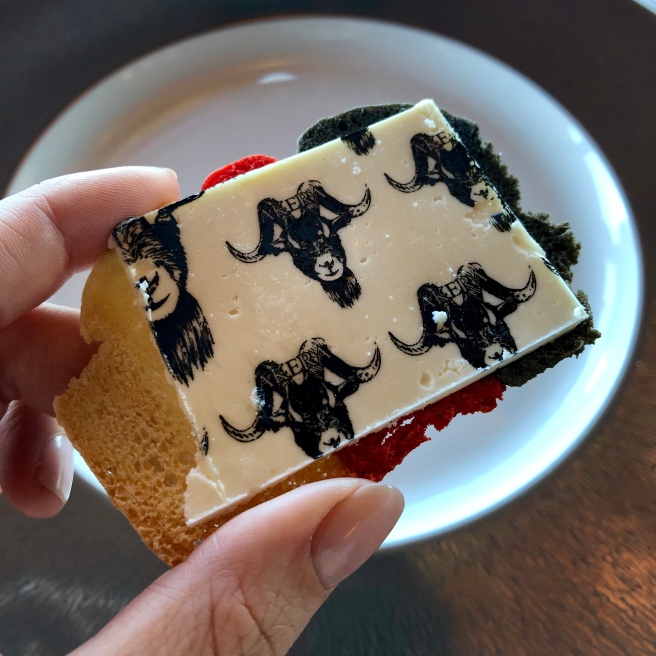 The first proper course of our tasting menu was a beautiful, summery lobster salad. The base was a crustacean-pink sheet made with egg which was topped with succulent lobster pieces and colourful salad leaves and flowers.

The next course was less classically pretty, but what it lacked in colour it made up for in comforting, deep flavour. Chickpeas roasted until crisp were sprinkled over a potato purée which was smooth and perfectly matched with slices of earthy mushroom and truffle, and the pork cube was rich, salty and fall-apart soft.

Next up was the “carpaccio” which was actually pasta made with Iberico and piquillo pepper and garnished with mushrooms and Parmesan. I think they oversold the effect of this dish for what was a great pasta salad with classic European flavours. Those mushrooms though! Yum!

Our next dish might just have been my favourite: a petite turret of risotto with snails and periwinkles, served with a delicate ball wrapped in a tomato and basil film. The seafood flavour was present but subtle and the freshness from the tomato and basil film added a wonderful freshness. 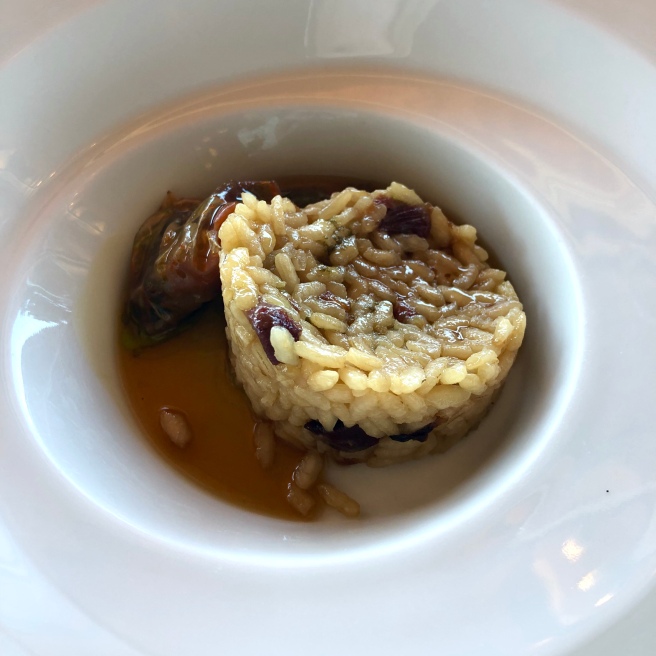 Fois gras is always a favourite with top chefs and fine dining restaurants, and nowhere more so than San Sebastián where it’s also quite the local delicacy. But fois gras makes me nervous, not least because of how it is produced, but I can find it’s fattiness a bit too much especially as part of a tasting menu. Our plates were presented to us with a plump piece of fois gras in the centre with a light, almost colourless white wine reduction. Our waiter explained the simplicity of the dish and that it just needed finishing with some salt and pepper at which point he absolutely smothered the thing in huge flakes of salt and whole peppercorns! Mark and I watched in disbelief, but as we looked more closely at our dish we soon realised that it hadn’t just been completely annihilated. The “salt” was made with sugar to get the structure and had only a mildly salty flavour, and the “peppercorns” were in fact puffed rice. The effect was a bit of fun and theatre and a nice crunchy element to the dish. The white wine reduction was potent and sweet and provided a perfect acidity to the fois gras, allaying all of my fears about this much-loved delicacy.

Our fish course was two ruby-red fillets of red mullet served cooked in the stock from the bones. The liver meat was served in minuscule quenelles either side which might not look like much but they offered plenty of flavour. Little jelly “fusilli” held bursts of garlic, parsley and soy sauce and looked like brightly colours glass decorations!

Our final savoury course (course 7 of 9 not including appetisers!) was our meat course. Mark chose the beef which was served with a glossy, thick sauce and shards of potato chips painted a red, copper colour. I chose the duck which arrived smothered in a light glaze and perfectly cooked. In the centre of the plate sat a rice paper “label” dusted with spices and served with a piping of mousse. At the far end was a crispy duck foot with micro herbs and a solitary blueberry to add a pop of juicy sweetness.

Seven courses down and we were ready for pudding! Not quite completely stuffed, we enjoyed the gin & tonic dessert with a jelly, sauce and sorbet using all the traditional flavours of a G&T. 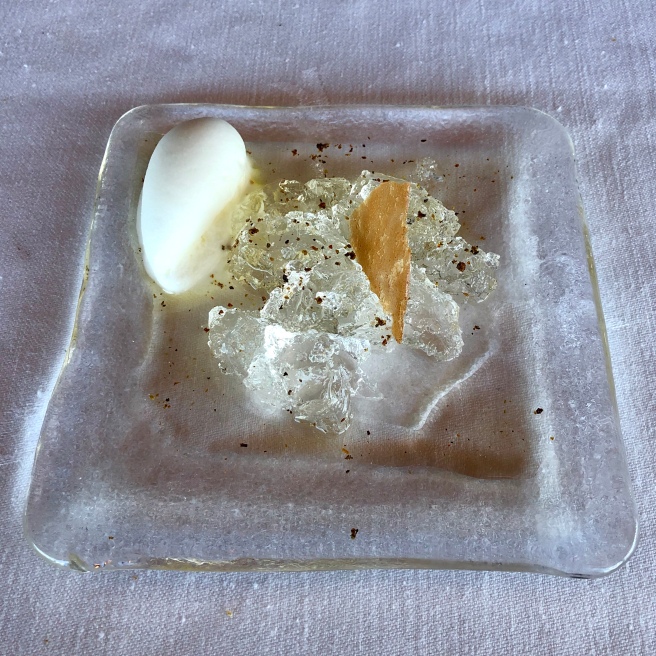 Last but not least, our final course was a little golden orb “cake” which was filled with an oozy almond centre. It was served between two huge blocks of frozen coconut mousse which was so light and incredibly moreish. 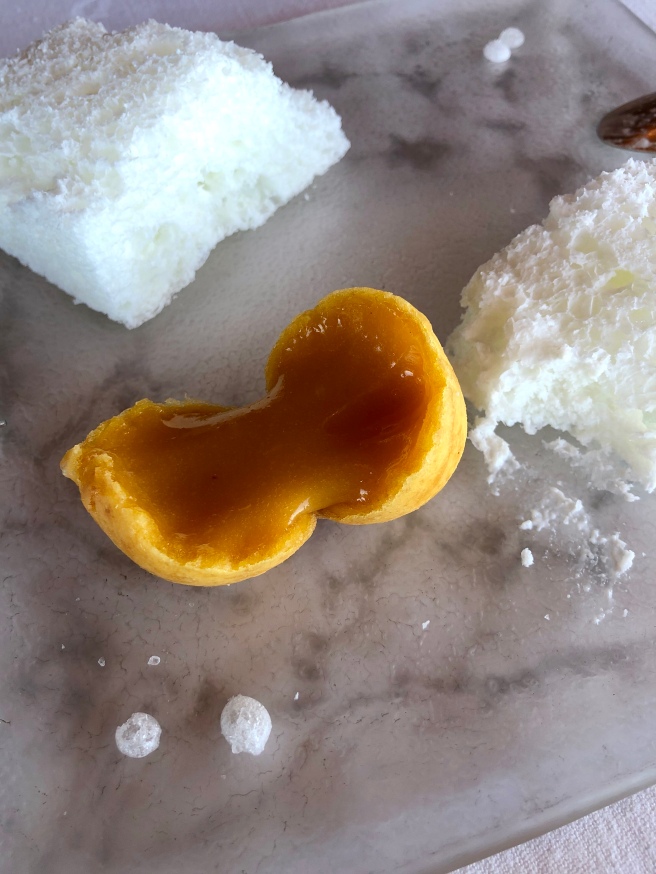 Bt the time we made it to petit fours I was well and truly stuffed and only managed a couple of bites of delicious nougat! They looked so pretty though… 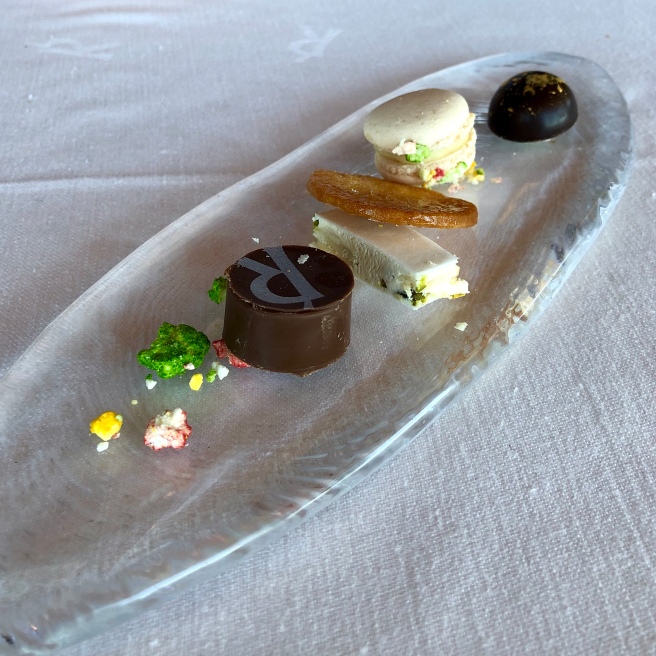 I couldn’t have ever imagined a better birthday dinner and the view alone made it magical enough, but the food was out of this world. The flavours were perfect, the amount of food spot on, and the little added elements of fun and theatre were the icing on the cake. Thank you Akelarre for making my 30th birthday one to remember for life!

One thought on “San Sebastián: Michelin Star Dining at Akelarre”