It feels like it’s been a while since we left Chiang Mai, and certainly feels like it’s taken a while to write this post! Chiang Mai is a buzzing, bustling town with so much going on, especially given that we visited during the annual Lantern Festival which you can read more about here. Whittling it all down into a single post hasn’t been easy, but here’s my highlights.

There are a huge number of temples in South East Asia and all of them are beautiful in one way or another. It’s unlikely that anyone can see them all either because you run out of time or just get “templed out”. We visited a fair few in Chiang Mai, but the ones below are the ones that stood out for one reason or another.

Wat Phra That Doi Suthep is probably the main temple site in Chiang Mai. Located a 30 minute taxi ride out of the town on a Doi Suthep hill, it’s grounds are beautiful and the view through the trees is stunning. It’s up a fairly punishing flights of steps (especially after the journey…) but there’s a lift as well. We picked up a shared taxi outside Wat Phrasing for a reasonable price. The journey was winding and a tad sketchy, so if you get travel sick make sure you’re prepared.

If you’re visiting Doi Suthep, you can also stop off at Wat Pha Lat which is on the way. We didn’t have time to go, so it’s not technically a highlight of our stay, but it’s meant to be beautiful and very peaceful.

Wat Phra Singh is in the central old town and we were lucky enough to visit when a service was in session and observe. The buildings are intricately decorated with gold and there is a huge golden stupa adorned with elephant statues. 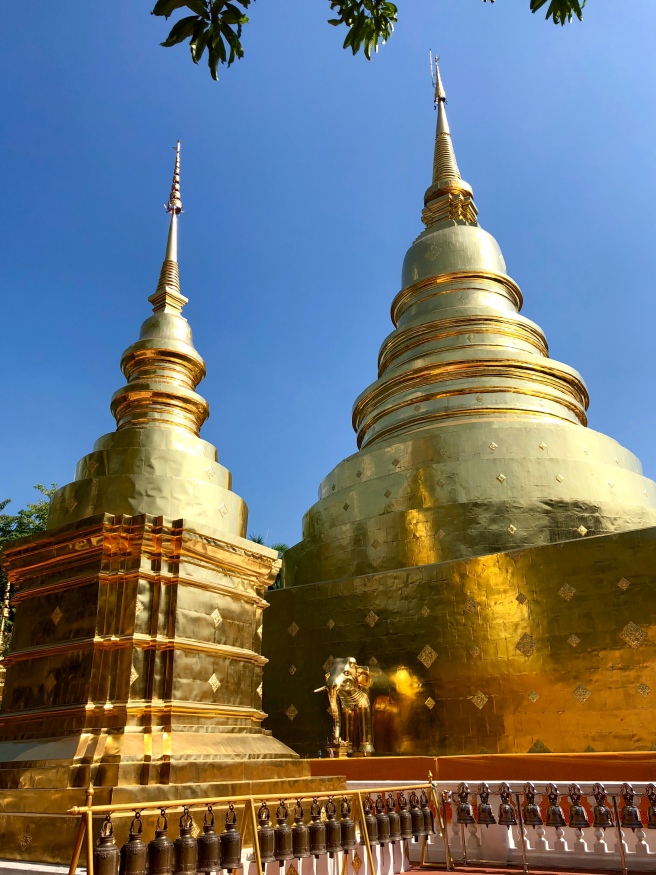 Wat Chedi Luang is also centrally located in the old town. It is probably named after it’s huge, partly crumbled 15-century stupa/chedi. I found the main prayer room really impressive as it’s quite sizeable and lined with gilded columns.

Shopping in the markets

Chiang Mai and markets are like crepes and Nutella – If you’re going to Chiang Mai, it just makes sense that you’re going to see markets! I love a good market and was pretty excited about this particular element of our visit. The markets are pretty much all aimed at tourists, and not everything is that great, but you can pick up some good finds at a decent price (with a bit of haggling).

The Friday Flea Market is held in the grounds of Wat Pan On and was probably my favourite for souvenirs as there wasn’t an overwhelming number of stalls, I found a couple of different pieces, and it generally had a really chilled out feel. We found a stall selling Thai sweet snacks and pastries filled with banana, durian, taro, pineapple and coconut.

The Night Bazaar is quite a popular evening destination with food stalls and plenty of souvenirs on offer. I particularly enjoyed the Ploen Ruedee market nearby that was a bit more compact, with some decent food stalls and live music in the evening.

We weren’t in Chiang Mai on a Sunday, but apparently the Sunday Night Market along Rachadamnoen Road is well worth a visit.

Out of town food markets

During our cooking class (see below), we were taken to a produce market out of the main town called Khachao Fresh Market. It was great to see what it’s like to shop with the locals and some people got some Thai food staples to take home.

Taking a Thai cooking class in Chiang Mai is a really popular thing to do, and it’s unsurprising given how well-loved Thai food has become all over the world. With huge popularity, comes a huge amount of choice, so I’ve written this blog post about the class we chose with Galangal cooking school, how we got on, and why we chose it in the first place.

Getting a Thai massage

Massages in Thailand are incredibly cheap, and parlours are pretty ubiquitous, so it’s tricky to know where to choose when every other shopfront is offering massages! Lila Thai Massage, immediately recognisable by its purple shopfront and in 7 locations across the city, had been recommended to us and we had read about it as well. Set up by an ex-prison Director, Lila Thai Massage employs women who have been in prison in order to reduce the number of women returning to crime. They go through rigorous training and certification in order to become a Lila therapist. I had an incredible, intense 1-hour Thai back, neck and shoulder massage for the equivalent of about £5.50 and left feeling like I was floating on a cloud.

Khao Soi is a delicious and comforting local dish of noodles served in a curry broth and topped with crispy fried noodles and a selection of shallots, pickles and chilli sauce/paste that you can add to your taste. The most popular place to try Khao Soi is Khao Soi Khun Yai, but there was a long queue when we went (it was during the lantern festival) so we went to Sailomjoy instead and theirs was pretty delicious. 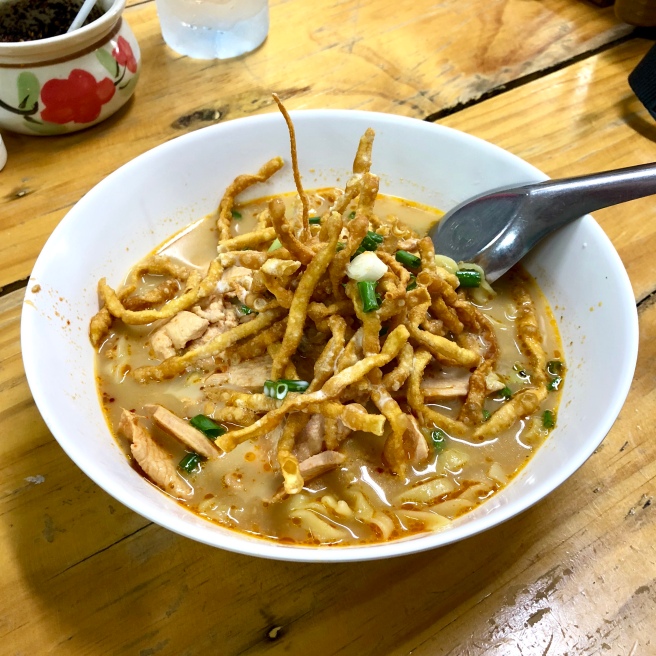 Most likely to be bought from a street vendor, Northern Thai sausage or sai oua are so aromatic and flavoursome. During the lantern festival we were intrigued by the tiny bite-sized ones that were being cooked in a big spiral and decided to be brave and have a go. The meat, aromatics and spices were mixed with some rice to create a teeny sausage-arancini hybrid that was mouth-wateringly delicious. The little balls are separated after cooking and given to you in a bag with some chilli sauce and a bamboo skewer to eat them with. Yum! 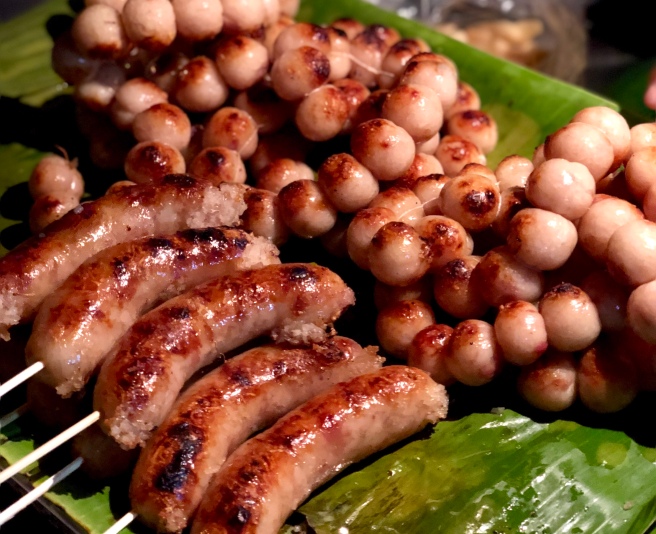 You can find mango sticky rice everywhere in Chiang Mai, and it needs no explanation (the clue is in the name). Fresh mango served with sticky rice and coconut cream, it might sound strange but it is really tasty. 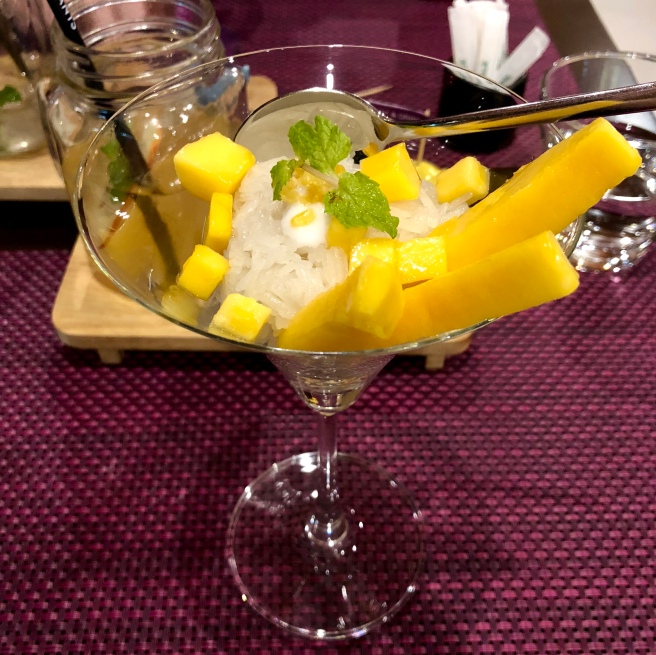 Phew – what a lot to cram into a post! Thanks for sticking with it. I can’t wait to share what we’ve been up to since our time in Chiang Mai!

There was an error retrieving images from Instagram. An attempt will be remade in a few minutes.