I recently received an email from the Japan Centre and noticed for the first time that it had an events section. Since they opened their new Panton Street store, it seems that it’s opened up new opportunities for how they can use their space. I hadn’t actually realised that the old Shaftesbury Avenue site is still open, but it now specialises in ceramics. Anyway – back to the email. My eyes were drawn to this pinch pot workshop, and I thought £25 for an evening playing with clay wasn’t too bad! All I needed to do was bring my own apron and anything I wanted to use to decorate my creation with.

I’ve never really made pottery, unless you count a little salt-dough piggy I made once in primary school. We were in good hands though – our teacher for the evening was Noriko Nagaoka whose beautiful pieces are sold in the Japan Centre. 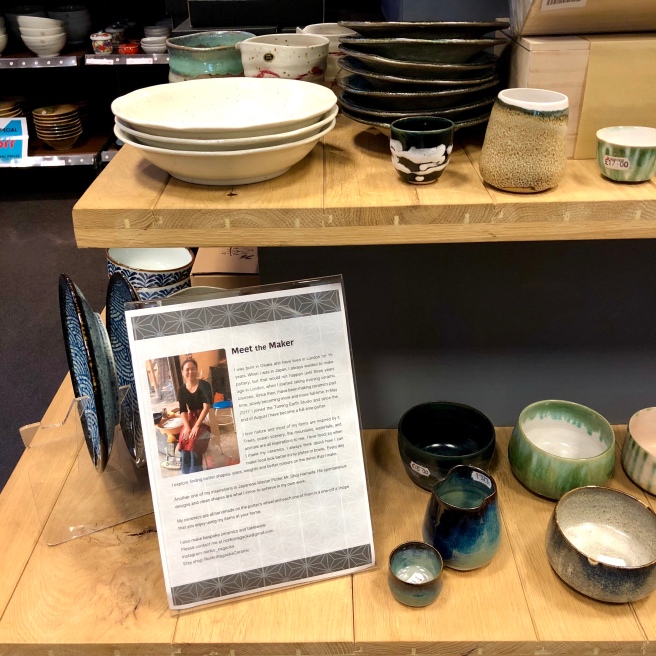 Noriko introduced us to the concept of pinch pot making and it turned out to be quite a straightforward method: you get a lump of clay, mould it into a ball to make sure you get as much of the air out as possible (apparently so it doesn’t explode during the firing process!), then you use your fingers to pinch the clay into your desired shape. Making the clay look how you imagined isn’t quite as straightforward though, and you have to make sure you don’t let the clay dry out, and you also have to be careful not to overwork it. 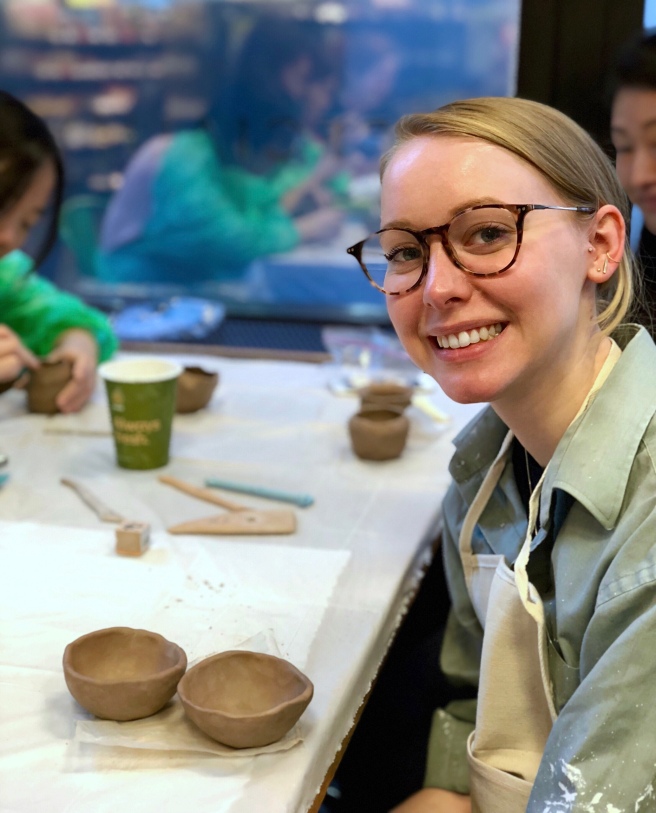 One of the beauties of pinch pot making is that there are loads of things you can do with it. It’s not as smooth and neat as throwing pottery on a wheel, but you can really play to the rustic side of pottery, and working in this way the workshop brought out everyone’s creative sides. It was really interesting to see how much variation there was in how each of the pieces were decorated. Some people were using stamps and shells to imprint designs on to their pots, others carved patterns out of their clay, and some twisted their pots into cool, distorted shapes. 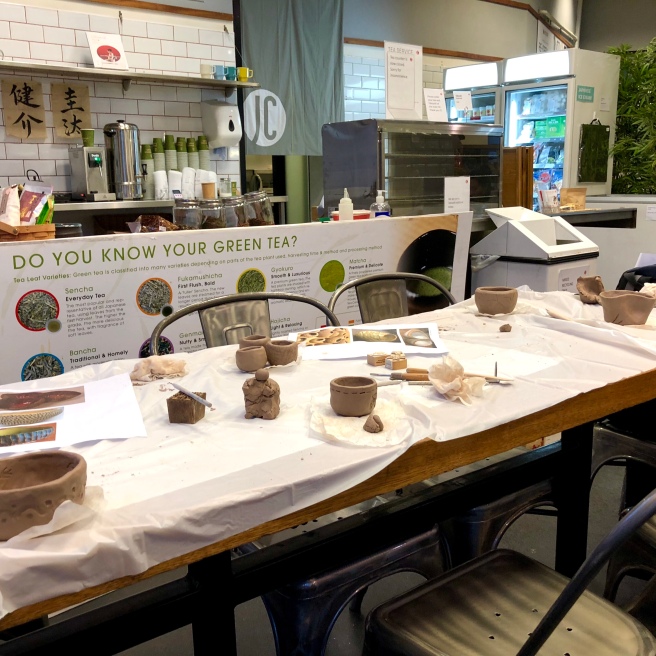 I decided to make two small bowls that I’m hoping I’ll be able to use as open salt and pepper holders- pinch pot pinch pots! -next to the hob in the kitchen. I spent a little while moulding the shape, leaving it a bit uneven for a more rugged effect, and then it took quite a while to smooth out the little cracks that had started to appear along the edges. Even though I wasn’t doing much decoration, I still used the whole hour smoothing everything out. 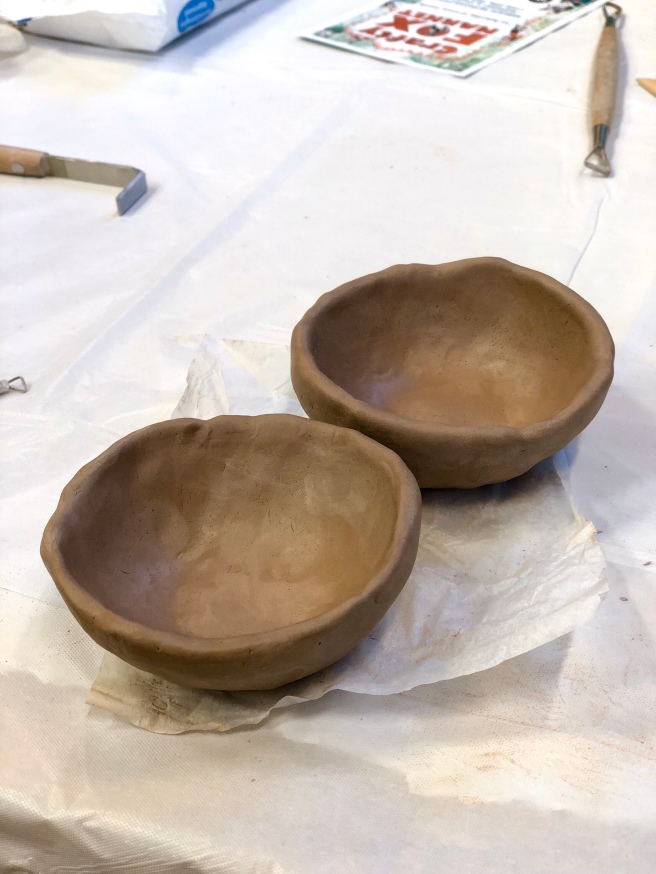 The only element of decoration I did add was a little Sakura stamp that I put on the bottom next to my initials. I like the idea of the bowls being very simple, but having a secret, hidden bit of character. 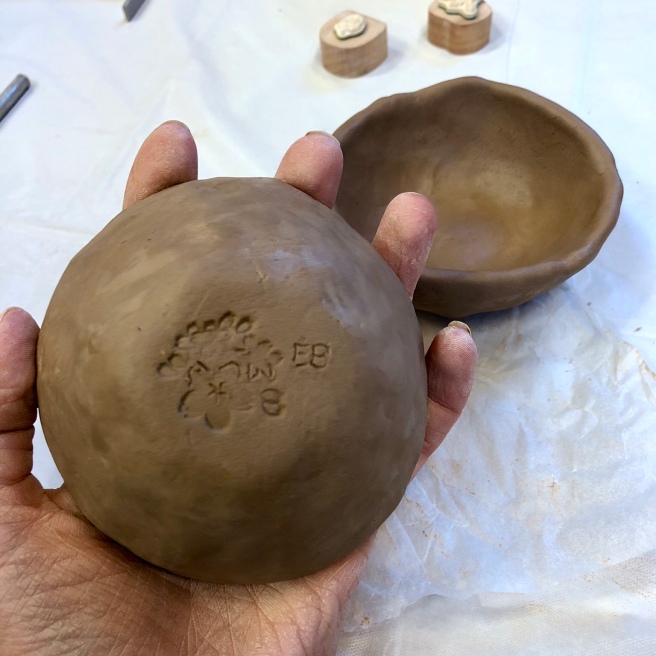 Now my little bowls will be fired and glazed – I went for a black glaze to go with the minimalist style. It will take about a month for them to be ready, so now I have to wait and see how they turn out! Fingers crossed that they survive!

One thought on “Pinch Pot Workshop with Noriko Nagaoka”