Wow it’s been a busy June! Between being assigned a plot on an allotment and planning for my upcoming three months of travelling at the end of this year (SO MUCH to tell you guys!) I guess there hasn’t been an awful lot of time for writing. It’s over a month since I got back from my little visit to Munich which I’ve written about here, but I had some really great food that I’ve been wanting to tell you about as well!

Aroma Kaffeebar was my first stop in Munich after landing in the morning. It served as the perfect pit stop on the way to my hotel to have a little break from dragging my suitcase and to recharge my phone and recaffeinate. The staff were super friendly, and I enjoyed the ambience and my latte (despite it being served in a jar…). The highlight though was the slice of plum tart I treated myself to (under strict instructions from my mother to have kaffee und kuchen) which was perfect. 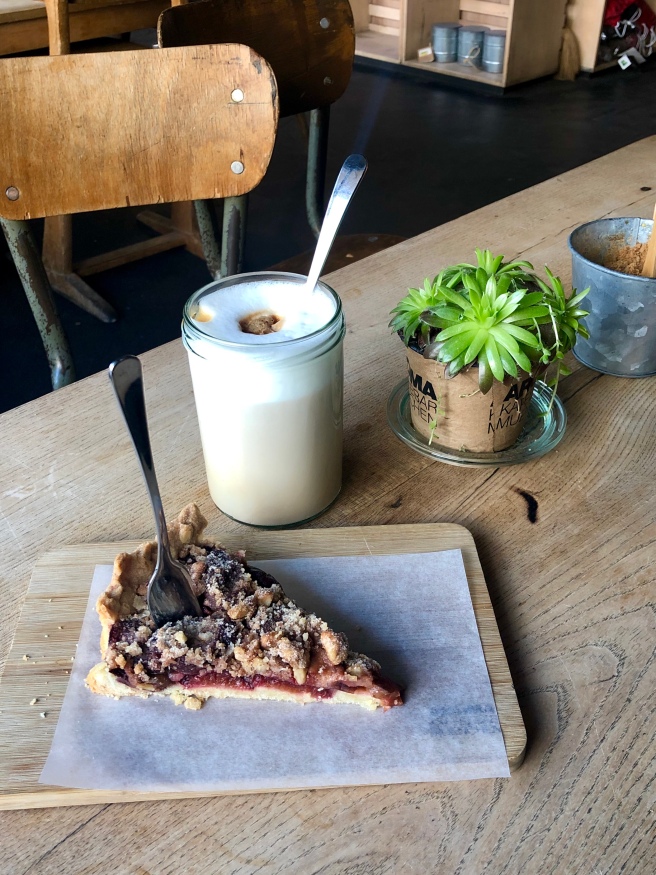 For the first couple of days of my trip I was by myself with colleagues coming out to join me a bit later. Usually I would grab something small for dinner to eat back at my hotel or eat out somewhere really casual, but I had read about a Georgian restaurant, IVERIA, just down the road from my hotel. This was the first time I have ever really dined out on my own and I was much more conscious of that fact than I expected. I’ve eaten out on my own countless times but never at a restaurant where they meet you at the door and you ask for a table for one. How weird is it that in this very specific circumstance it suddenly seems like a big deal to be alone? Anyway, I took the opportunity to break down that particular personal barrier and I really enjoyed it! I sat with my book and ordered the satsivi which is chicken in a walnut and garlic sauce and I also got a side of bread. The satsivi was served cold (intentionally – don’t worry) which is different to when I’ve tried it before. I think I still prefer it hot, but it was still really flavoursome and delicious. Probably not a bad thing that I was travelling alone with the amount of garlic in the sauce! 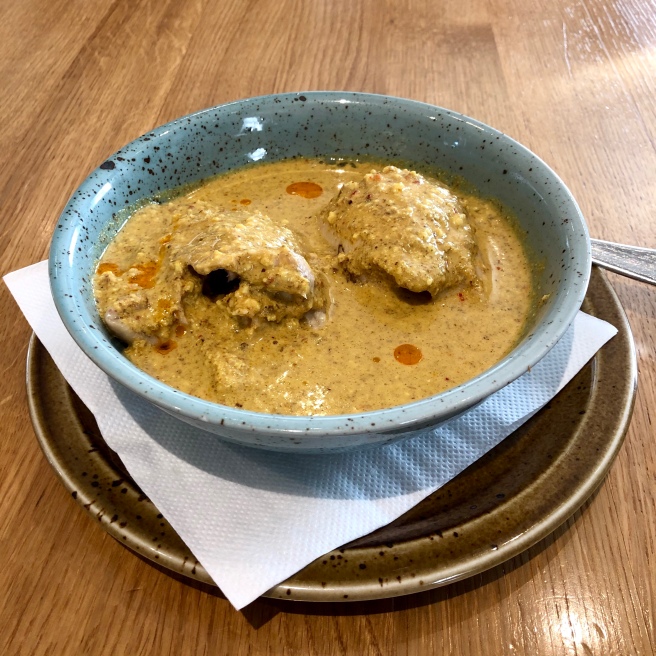 Once my colleagues had arrived in Munich it was a great chance to truly enjoy the beer garden experience. We sat down for a beer and a snack at Augustiner am Dom in the shadow of the Frauenkirche. I opted for the Radler (basically a shandy) and a pretzel because, well – when in Rome! The others ordered what I think they assumed would be small portions, but obviously those don’t exist when ordering Bavarian food at a beer garden in Munich, so we ended up all sharing sauerkraut, potato salad, bratwurst, and leberkase (a sort-of meatloaf that also has cheese in it…yeah I don’t really get it either and that’s after trying it!). 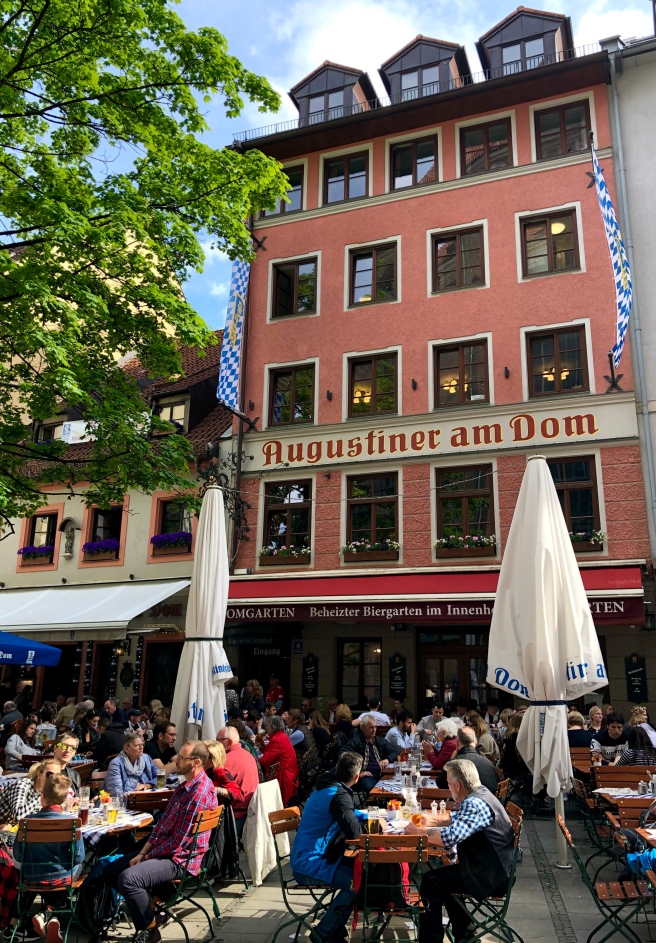 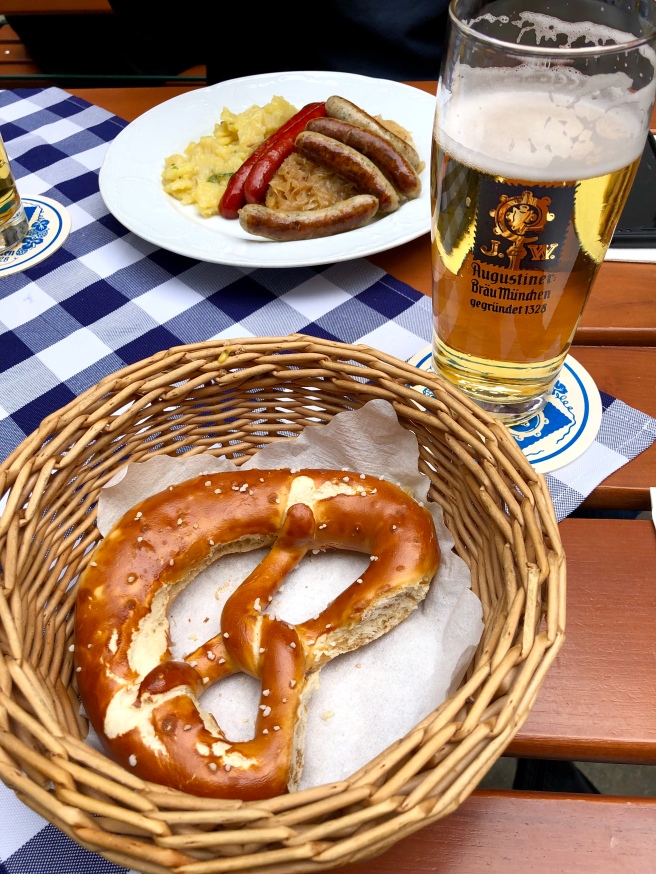 We were blessed with some incredible sunshine the whole weekend we were in the centre of Munich and so we took a stroll around the city and the beautiful Englischer Garten in the afternoon. We found ourselves gravitating towards the Pagoda which is circled by a huge beer garden – even by Munich’s standards! We didn’t actually eat at the pagoda, but seeing what others were eating was enough to know that this is firmly on the foodie map of Munich. I saw pretzels as big as bin lids and roasted pork joints the size of my head. This was serious Bavarian fare in serious portions and not for the faint-hearted especially when accompanied by a stein of Munich’s finest! 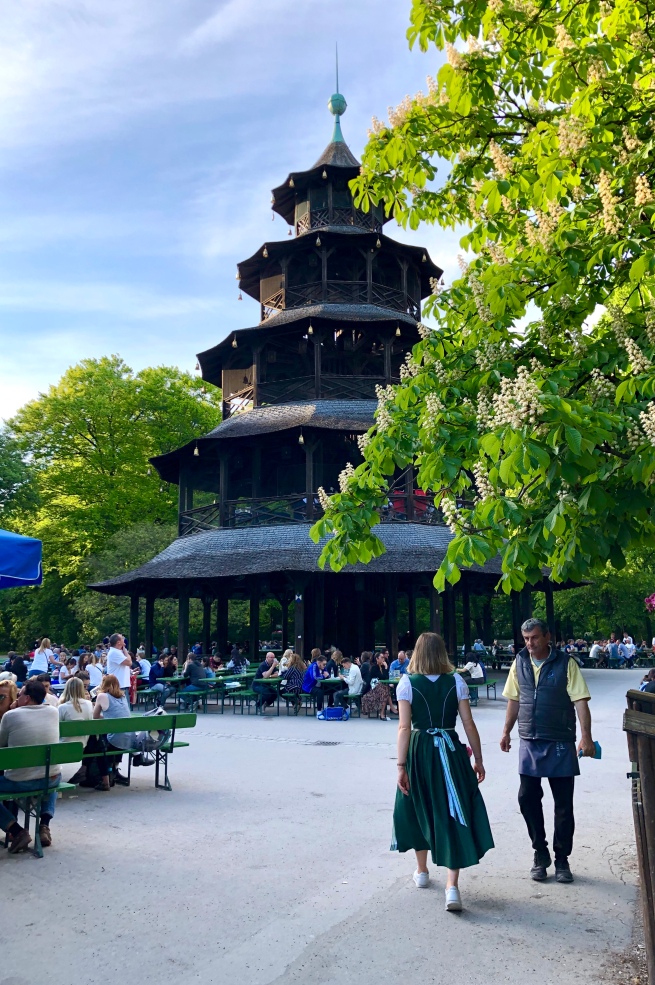 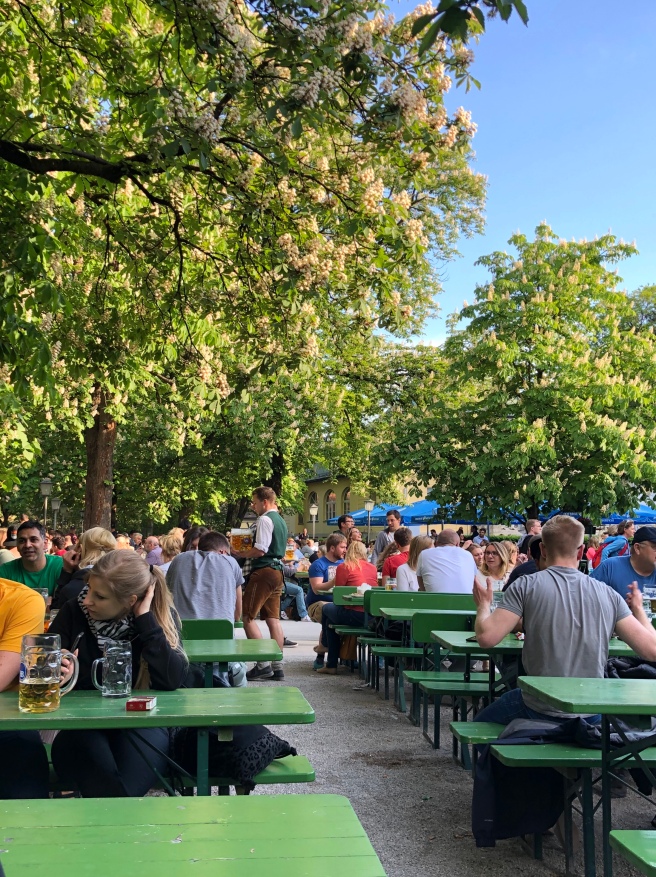 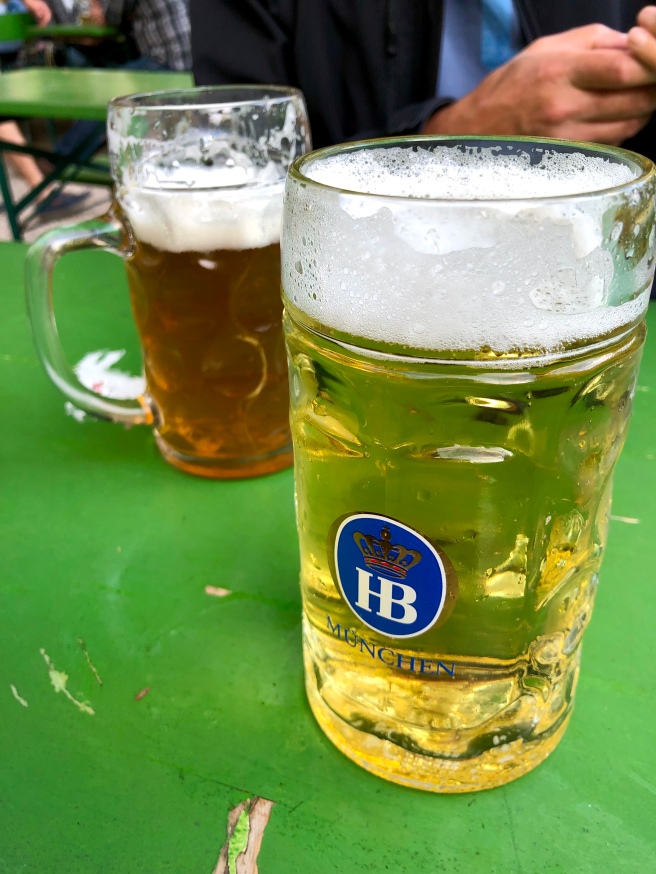 On the Saturday evening, once my colleagues had arrived, we were struggling to find somewhere to get a good taste of Bavaria. Most of the more traditional beer houses were filled to the brim with football fans watching Bayern Munich beat Eintracht Frankfurt 5 – 1 in the Bundesliga. We happened to wander past this modern, wine-bar-esque restaurant and took a look at the menu – exactly what we were looking for. We each ordered something a bit different and all of the food was absolutely on point. I had the small pork roast which came with a pleasingly crunchy crackling, soft doughy dumplings and a rich gravy to finish. My colleague ordered the epic version which also came with wurst, sauerkraut and what looked like a burger! I also tried some of my colleague’s white asparagus with hollandaise which came with his salmon – a perfect celebration of one of the season’s best ingredients. 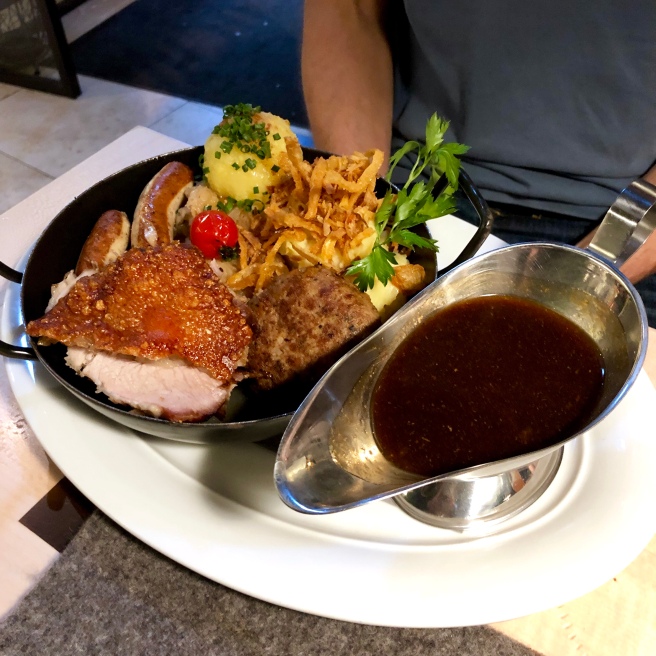 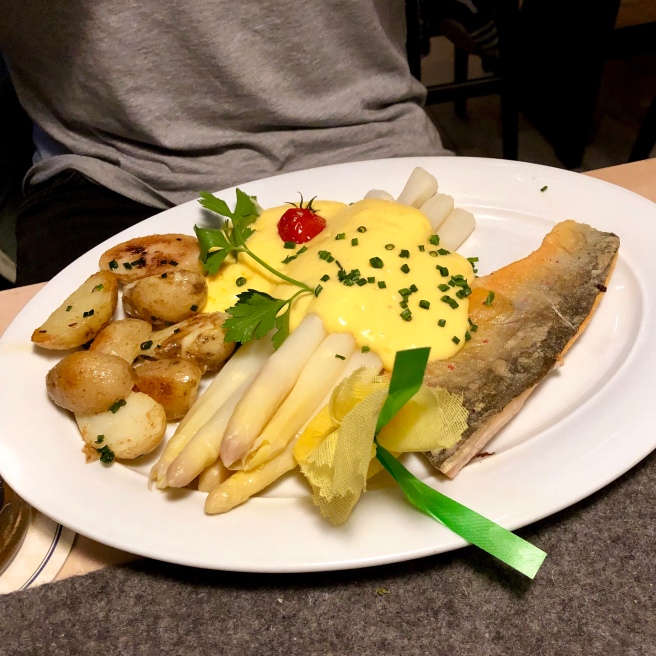 Have you been to Munich? What were your foodie highlights?