Before travelling to Vietnam I asked a few friends for advice about where to go and what to do. One friend had spent a year travelling the world with her husband and then four-year-old daughter and wrote about her experiences on her blog, Fog and Wonder. The very first tip she shared with me was to go to Sapa near the Chinese border to trek through the hills and rice paddies with a guide from the local H’mong tribe. Even though we only had two weeks in Vietnam and loads to see in that time, I felt that we had to fit this in!

After our few days in Hue, we got a flight to Hanoi and headed straight for the Sapa Express office who run an overnight sleeper bus service all the way to the centre of Sapa. It took a bit of effort to research whether to get the train or the bus, but given the new motorway that has been opened the bus seemed to make more sense. The bus took us directly from Hanoi to Sapa, taking just under 6 hours leaving Hanoi around 10pm and arriving at about 3:30am. Once the bus arrived we were able to stay on the bus until 6ish to get a bit more sleep. The seats/beds were reclined and comfy, and I actually got more sleep than I expected to. We found that it was best to take absolutely minimal belongings on to the bus as the only space we had was the the bed itself and an area in front of you to put small items. Most of the journey was along a motorway and we took a couple of rest stops – this meant the bus got quite warm as the bus was stopped during these breaks, but it soon cooled down once it got going again. The last hour or so of the journey was along winding roads into the hills, so I actually took travel sickness tablets for this bit which turned out to be a good idea as someone was actually quite ill on the return journey.

From what I’ve heard, the train takes a bit longer than the bus plus it stops in Lao Cai where you then have to pick up a bus to Sapa itself. I’d definitely recommend the Sapa Express bus instead.

Getting off the bus we were greeted by a number of local women looking for anyone who needed a guide. We had already booked our two-day trek with Sapa Sisters and politely declined the calls of “Hellooo, trekking?” as we made our way through the town to their office. We weren’t due to meet our guide, Ru, until 9am, but the Sapa Sisters office had somewhere to leave our big bags and we took a bit of time to repacks couple of much smaller bags with just the essentials for our overnight homestay in the hills. We had plenty of time so we walked back towards the lake and found somewhere for breakfast and I tried my first H’mong tea made by infusing ginger, lemongrass and cinnamon.

Just before 9am we returned to the Sapa Sisters office where all of the trekkers and guides were meeting. Ru came over and introduced herself and we discussed the plans for the trek, where we would go and the level of difficulty we wanted to do. The shortest route was about 10km and the longest was around 16-17km so we opted for the longer route. The main difference is that the shorter routes will follow more of the roads, whereas the longer routes take you off the beaten path a lot more. We were ready to go when Ru stopped and said “hold on – I just need to get my baby” who was 4 months old and spent the whole day strapped to Ru’s back in a traditional H’mong baby carrier covered in beautiful beading and embroidery.

We started our trek down steep slopes at a slow and steady pace. I was fairly cautious, not wanting to slip as I got used to new, unfamiliar terrain. A couple of H’mong ladies started walking with us and seemed to want to help me by offering their hands, but I was much more comfortable with a bit of space. They walked with us most of the morning before they split off at their village, but not before trying to encourage us to buy some local handicrafts. It turned out that this was quite common and most of the people at our homestay had similar experiences.

The views were misty and almost eerie as we gradually descended, meandering our way down into the valley. The rows of rice paddies striped along as far as the eye could see and the pools gleamed in the hazy sun. It was breathtaking. 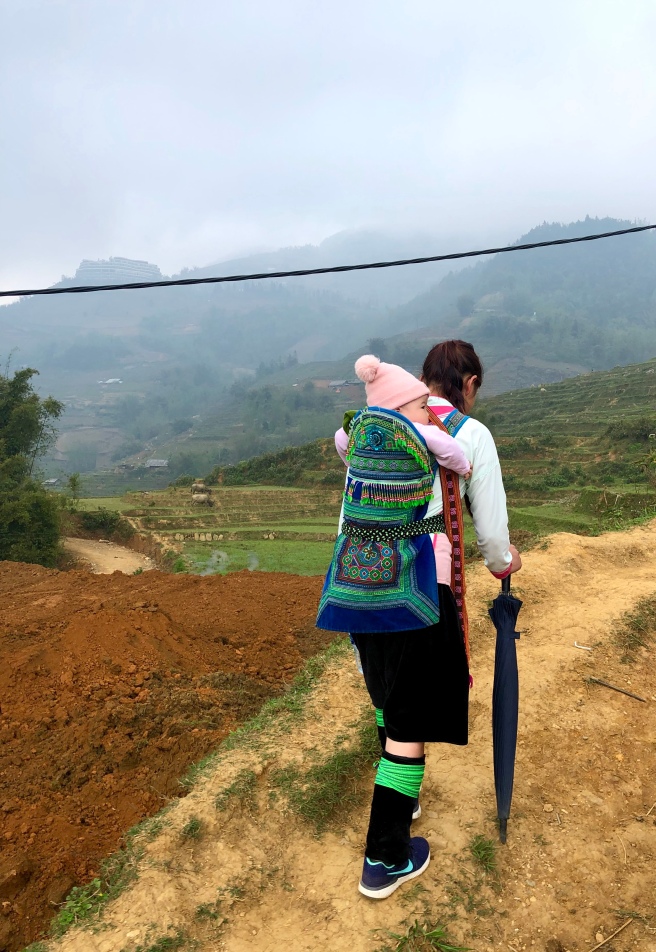 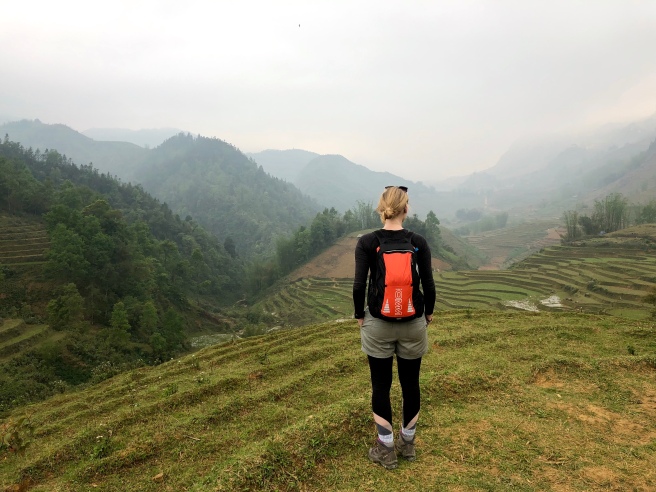 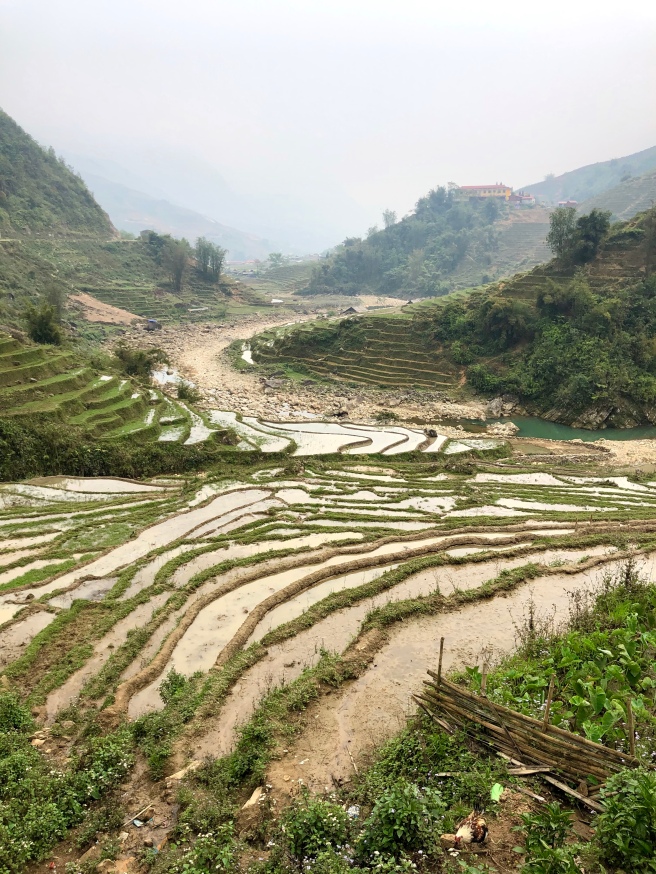 One of the options we could prebook through Sapa Sisters was to have lunch at a local home which sounded interesting and so I opted for it for our first day. I imagined watching or even helping the family to prepare food and eating all together, but it wasn’t like that which I guess was a bit of a shame and I felt a bit like we were intruding. The food was simple but absolutely delicious: egg cooked with greens that I think were spring onion, steamed morning glory, chicken with vegetables, crunchy green beans with garlic, rice, and a spicy, sour chilli sauce made with chilli, salt and lemon juice. It was wholesome but healthy – perfect to set us up for some more hiking.

The afternoon’s trekking was a bit shorter which was a blessing as the weather had really warmed up and the sun was even peeking out every now and then.

One of the things that struck me about trekking through the Sapa hills was just how much wildlife is free to roam around. We saw water buffalo, ducks, geese, dogs and countless chickens on our walks through villages and farms. At one point we came across a hut where local people were dying fabrics with indigo, and another where someone was brewing rice wine with a complex set up of tubes and pots. 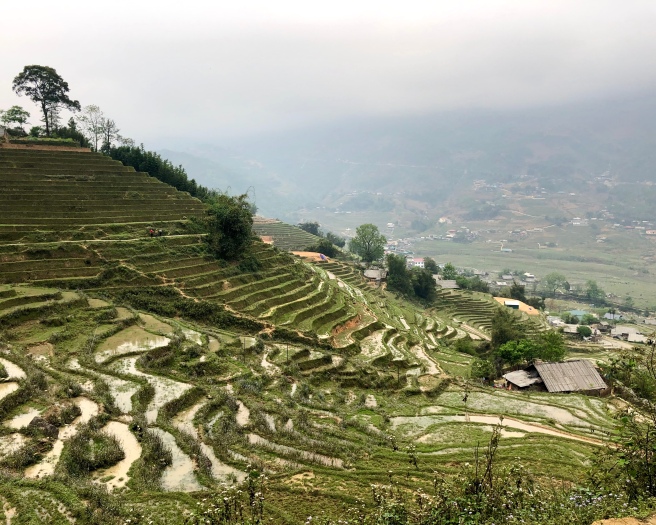 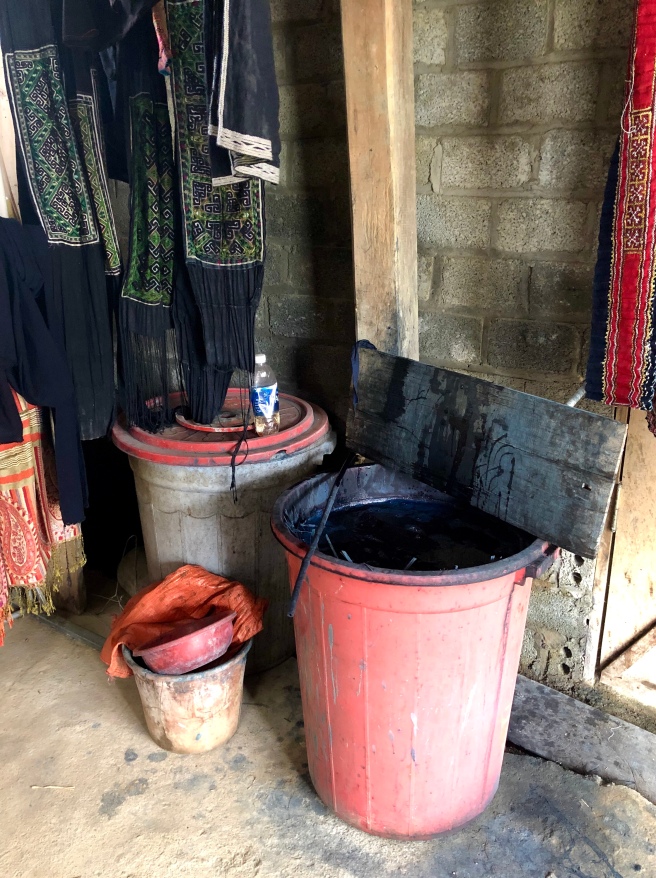 At about 3pm we arrived at our homestay and we could finally take off our shoes and were given a cup of hot tea and sat on the veranda looking out over the beautiful view. Our guide showed us around and we picked out our beds and had a shower to freshen up. There were a mixture of single and double beds, each with a duvet, thick blanket and a mosquito net, so any concerns I had heard about getting cold in the night were unfounded. The facilities were all really clean, the showers were warm and there was a self-serve, honesty system for beers and drinks.

As it started getting cooler out on the veranda, we naturally started gathering around the tables in the main area. In the early evening the guides brought us some delicious crispy chips and some dipping sauce as an appetiser. It was great to meet the other people and getting to know one another and sharing our experiences of the day’s trek over a plate of chips!

For dinner we shared big platefuls of delicious stir-fried vegetables, cabbage, tofu, chicken, steamed rice and fried spring rolls. We finished off our dinner with the local rice wine or “happy water” and hearing some hilarious drinking anecdotes from the H’mong guides.

Most of the guests were all sleeping in one big dormitory which wasn’t loud, but earplugs were a real help as I’m quite a light sleeper. The bed was super comfy though and I didn’t have any problems sleeping off the day’s hike! 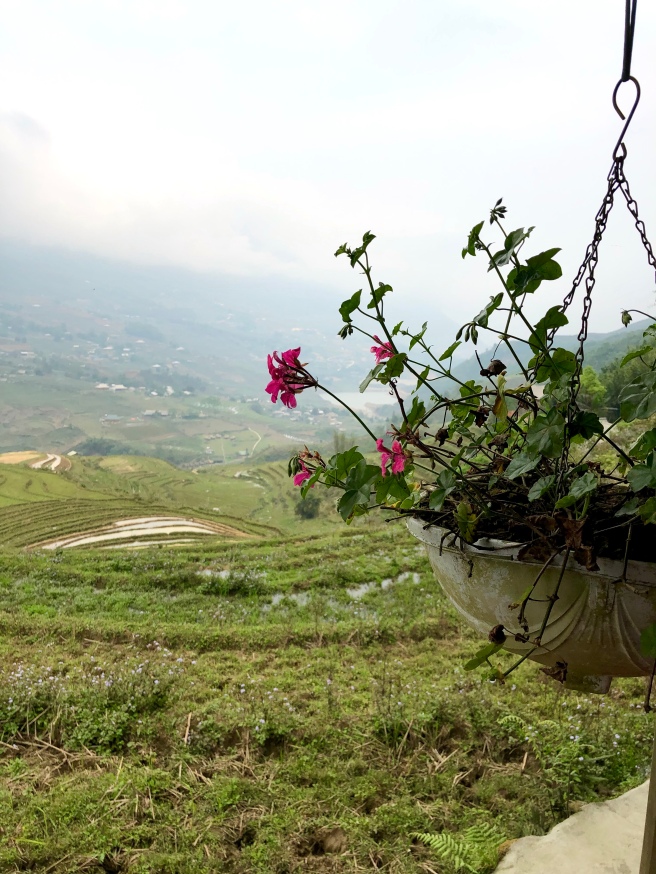 The next morning we woke up fairly leisurely around 8am and got ready for breakfast. The weather had been awful in the night and it was still raining heavily so we spent the morning mentally preparing for the day ahead. We all hoped out loud over platefuls if banana crepes that the rain would stop by the time we started walking again around 9am. Somehow our hopes paid off and the rain eased off, leaving just muddy paths to contend with. Our guide went to find me a bamboo stick to help with balance which was invaluable! Once again we had the extra company of a H’mong lady who seemed to attach herself to me presumably expecting me to fall so she could help me get up which didn’t happen. Again, she split off at some point after wanting me to buy something from her shop in the village, which I just politely declined. 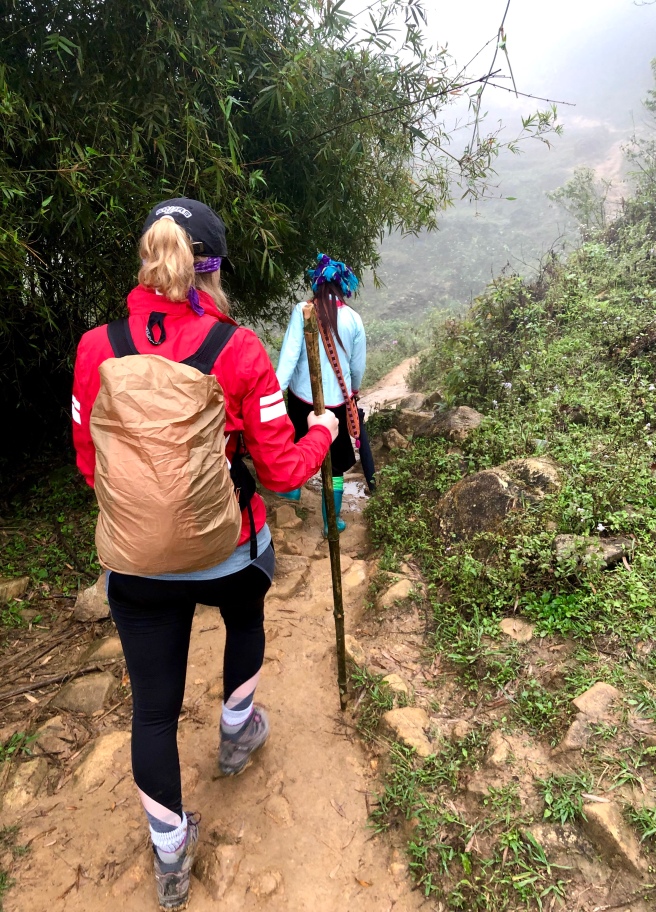 At lunch we all congregated back at a local restaurant to have some fried rice or noodles before getting a minibus along the bumpy roads back to Sapa.

Back at the Sapa Sisters office we were able to freshen up and collect our main bags before getting our bus back to Hanoi. We said goodbye to our guide and her baby with a tip and a parting gift of some chocolate mini eggs as it’s coming up to Easter. Our lovely guide returned the gesture with handmade fabric bracelets.

After a couple of days of trekking along rice paddies and steep paths it was so nice to be able to lie down on the bus back to Hanoi! We arrived back in the city around 9pm.

I’m so glad that we made the time to visit Sapa to see the incredible landscape and meet the local H’mong people. If we’d had more time we absolutely would have done a longer trek. We met some great people too who I’m hoping to stay in contact with.

For me the pace and level of the trekking was perfect for what we wanted out of it as it meant we could take in the scenery and stop to take pictures as much as we wanted. I think if you’re into more hardcore, endurance trekking the pace might feel a little leisurely, but for us it was perfect.

Have you been trekking in Sapa? If not, is it on your bucket list yet?