“Eager anticipation” doesn’t quite do justice to the lead up to my first ever three Michelin star dining experience. As soon as the date was in the calendar for our reservation at Restaurant Gordon Ramsay in Chelsea my appetite started building!

We arrived well in time for our reservation (did I mention I was eager?) and were the first diners to arrive for the evening. I was struck by the quaint, cosy dining room of no more than 15 tables, and the sheer number of staff that were present to cater for our every need. I found it a teensy bit overwhelming as particularly at the start of our evening we had staff coming over every few seconds to do something or other. It did settle down throughout the evening though. The hardest part of any meal is choosing what to have and we had a choice of picking from the a la carte menu, or opting for either the Menu Prestige or Seasonal Inspiration menu. We chose the classic Menu Prestige.

We began with some dainty canapés. My first bite of the entire experience was a three-Michelin-style “Fish and Chips”: a potato crisp topped with a delicious combination of roe, fish mousses and gels and finished with delicate dill fronds. What a first bite to kick off the experience! The flavours and textures melded together perfectly and those little roe baubles popped playfully while the crisp provided that necessary crunch. I followed it with the kingfish dusted with seaweed and crowned with a yuzu gel – delicious. The final canapé was a bite-sized pastry topped with crispy jamon – again delicious.

After our canapés we were surprised with an amuse-bouche of “Welsh Rarebit” – a delicate egg shell sat on a basket “nest” and filled with a light, foam-like rarebit cheese sauce and topped with some crunchy breadcrumbs. I appreciated the British nod to kick off the very French Prestige menu.

Our first official Menu Prestige dish was the pressed fois gras with clementine segments, toasted hazelnuts and a slice of soft, lightly toasted brioche. The fois gras was smooth and rich, and so the clementine was a welcome refreshing balance, but overall I found it quite rich for course one of seven.

I have to take a moment here to highlight the exquisite glassware. The glass was so fine and the stems were so thin I was almost nervous to pick them up as though the slightest pressure of holding it to my face would cause them to shatter, but they didn’t of course.

The classic ravioli with lobster, langoustine and salmon has been a long-standing and iconic feature of the Restaurant Gordon Ramsay menu. Sitting in the middle of the plate was the proud, portly raviolo on a swirl of vinaigrette before the sorrel velouté was poured around it. I enjoyed the raviolo itself as the filling wasn’t a mousse and you could enjoy the texture of lobster, but the fresh sorrel flavour of that vibrant green velouté was what lifted this dish to another level for me.

Next was the first of our mains: Cornish turbot which was beautifully golden. On the side were two potato gnocchi that were slightly softer than you would normally expect, but which went together perfectly with the fish as almost a cross between gnocchi and mashed potato. Elegant truffle shavings and gels gave depth of flavour without overpowering, and a leek purée offered freshness. The sauce was a rich jus gras made with katsuobushi, Japanese smoked and dried tuna, for an injection of umami. I loved the touch of the single wild garlic flower as well to give a bit of garlic zip.

The main event was a choice between Herdwick lamb and roast pigeon, of which Mark chose the former and I the latter. Mark’s lamb was his dish of the day – the lamb was so tender it melted in your mouth and the sauce was on point. My pigeon was also rich and tender and I loved the crunchy buckwheat crust. 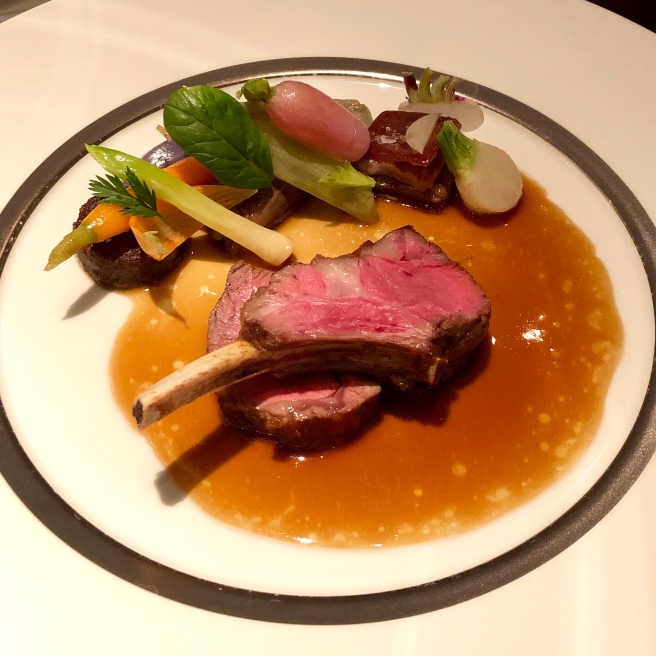 When asked to choose between a selection of cheeses and a palette cleansing coconut, pineapple and kaffir lime soup, it was an easy choice for me. I loved the sound of the soup, and it would most likely have been a more sensible choice from an appetite and waistline point of view, but I am not one for sensible choices when a plate of decadent cheeses is at stake – especially when I’ve seen the cheese trolley on the way in! Look at this cheese selection and tell me you wouldn’t do the same! I have to admit I didn’t quite catch what all of the cheeses were as I was mainly gawping at them in anticipation of tasting them. All were delicious and I have to comment on the grapes – I have honestly never tasted grapes with so much flavour. 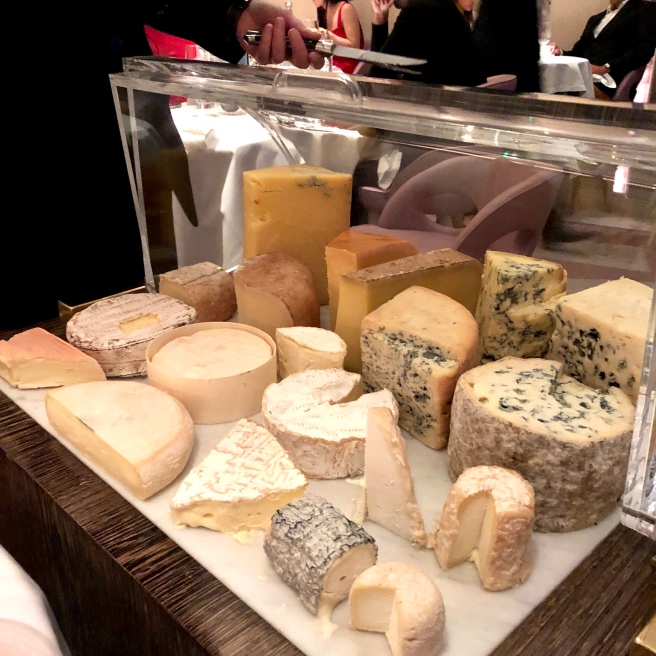 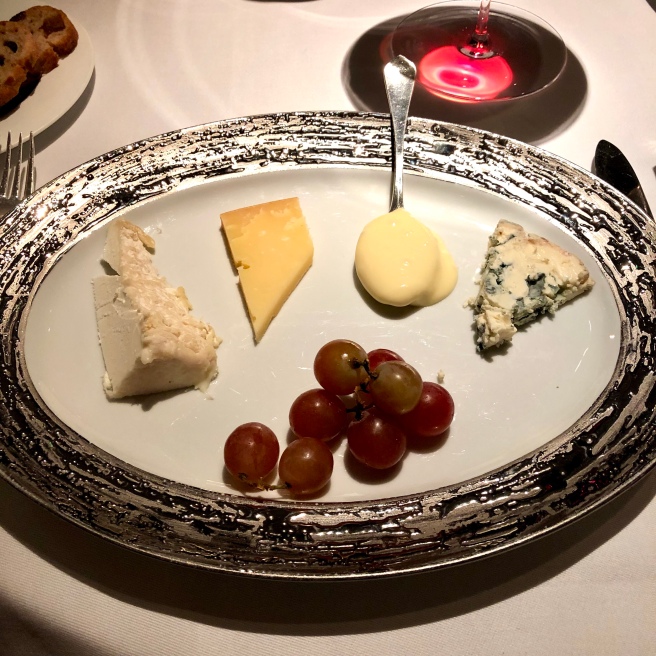 After our somewhat indulgent choice to have a plate of cheese, we were gently coaxed into dessert with a Granny Smith and camomile sorbet with cider granita. Beautifully fresh and a genius combination of flavours – I going to need more green apple and camomile combos in my life after that.

The last stop on our three-star journey and my favourite of them all: the lemonade parfait with a perfectly round sheep’s milk frozen yoghurt ball, bergamot gel and a crisp honey tuile. The parfait was dense, creamy and smooth, yet still singing with vibrant lemon flavour, with the bergamot and honey providing sweetness and fragrance that crescendoed into such a scrumptious finale!

At this point it was very much time for a fresh mint tea, alongside which we were served some lovely petit fours of lime ice cream balls coated in white chocolate and served in a smoking silver box of dry ice, chocolate generously topped with nuts and dried fruits, and some fruit jelly cubes.

As we were getting ready to leave, the maître d’ invited us for a quick tour of the kitchen. The kitchen was refurbished early last year and is absolutely state of the art as you can imagine. It was surprisingly calm – none of the shouting or swearing that you would perhaps associate with Gordon himself – a very tightly-run ship working to optimal efficiency. I was a little star-struck to see Chef de Cuisine Matt Abé in the flesh running the pass. 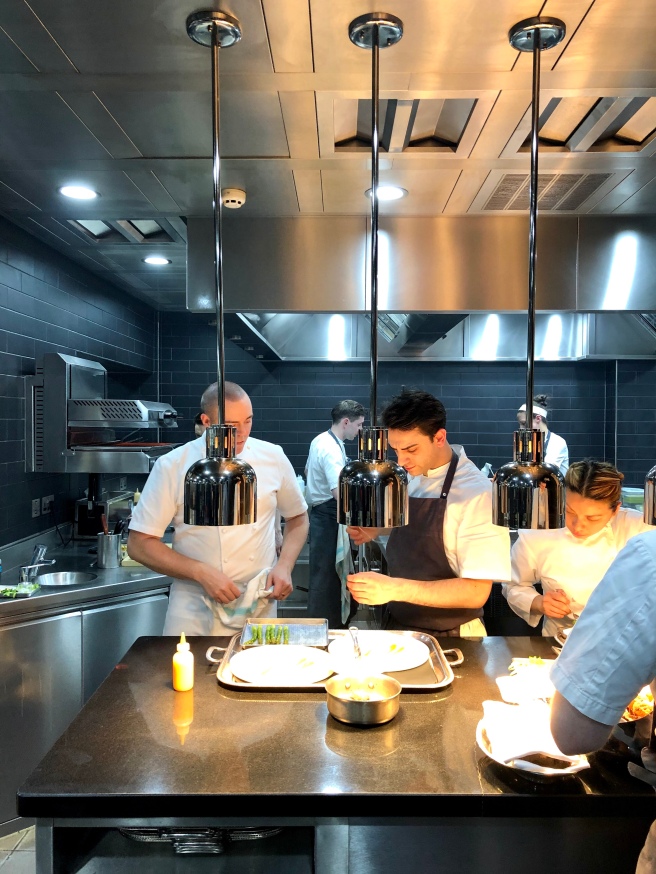 Overall, the experience was incredible – we were made to feel like royalty – and even if I probably wouldn’t want that level of attention every day, it was pretty special to experience that level of service. It’s the little touches that leave the biggest impression: the canapés, the amuse-bouche, the petit fours, the three members of staff who discreetly and seamlessly escorted me to the bathroom (if you’ve ever been to a restaurant with me you know how much that will have meant to me!). What makes Restaurant Gordon Ramsay a cut above the rest is the sky-high level of service, the flair of culinary creativity of course, but most of all it’s damn tasty!